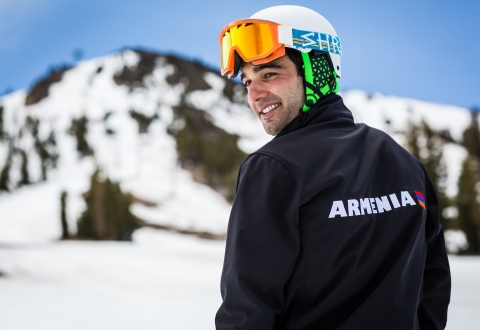 Every sportsman dreams of becoming an Olympic champion, but fist is the dream of participating in the Olympic Games. This is the case for Arman Serebrakian, an alpine skier who will represent Armenia at Sochi Olympic.

“My dream has come true. I have been dreaming of a chance to participate in the Olympic Games for many years, and of course to represent Armenia. I was born far from Armenia, but my dreams were always connected with this country. Today one of my dreams is coming true,” he said in an interview with NEWS.am Sport.

Since his father took him down his first slope at the age of 2, Arman immediately fell in love with the sport.  Growing up, his Armenian parents continuously took Arman and his younger sister (2010 Vancouver Olympian) to the mountains in Lake Tahoe, California each and every weekend. During high school, Arman decided to graduate early to focus solely on skiing with the goal of pursuing his lifelong dreams: making it onto the World Cup circuit and eventually to the Olympics.

“A representative of Armenia’s ski federation approached me during one of the tournaments.  We agreed to meet and discuss the matter. I accepted the offer to represent Armenia and compete to qualify for Sochi Olympics. I failed to qualify, but the federation chose me for the two additional places given by the international federation. I am pleased and proud to get it,” he said.

Arman’s expectations from Olympics are to perform well and be included in at least 30 best.

The skier set a goal to prove that Armenia has a strong athlete during his first Olympic Games. Arman says if everything goes well, he may appear among 20 best alpine skiers in Sochi.

The athlete will participate in two small tournaments in the U.S. and will leave for Sochi.

“I have a dream: to come to Armenia with good results and make everyone happy. I plan to live and train here.”