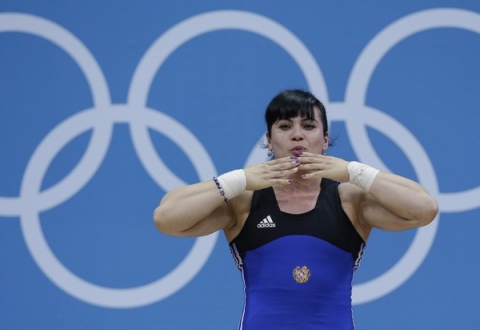 Bronze medalist of the Olympics, Armenia’s Hripsime Khurshudyan said she wanted to extend herself and win a medal after defeats of other Armenian weightlifters. Hripsime lifted 128 kilograms in snatch and 166 in clean and jerk having a total of 295 kilograms.

“I have never been so happy. I was waiting for this medal so long. I have been training since I was 15. I am very, very happy,” she told the NEWS.am Sport reporter.

Armenian weightlifters in other categories made a poor showing and failed to struggle for medals.

“Defeats of Meline [Meline Daluzyan 69 kg] and weightlifters from men’s team urged me to do my best. It was hard to win. A year ago I was seriously injured and underwent a surgery. I am happy to win, I am happy that Armenian flag is raised. I congratulate Arsen Julfalakyan [Armenian silver medalist in Greco-Roman wrestling]. I want Armenia to win a gold medal,” she emphasized.

Hripsime said the ceremony was like a dream. “I cannot describe my feelings,” she added.

“I dedicate my victory to the people of Armenia and my boyfriend. I have not talked to him yet but he said he believes in my success when I was leaving. We are likely to get married by the end of this year but I would not give up weightlifting until I achieve the main goal – Olympic gold,” Hripsime concluded.