Henrikh Mkhitaryan: I am not a star 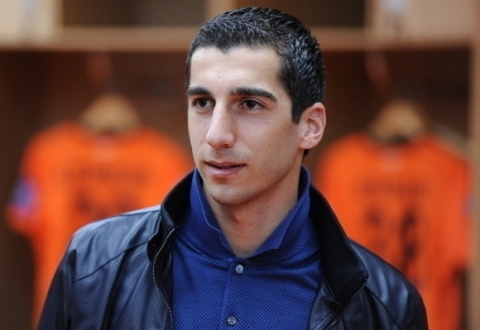 YEREVAN.- Many people think that I have achieved great success, but I do not think so. Great achievements are still ahead, says Armenia and Shakhtar Donetsk forward Henrikh Mkhitaryan.

Each person must wait for a chance and use it in the right time. Armenians are good players, and they will achieve much if they know how to use their potential, Mkhitaryan said in an exclusive interview with NEWS.am Sport.

It was the best year in my career over the last 5-6 years. But I would like it to be the worst. I want to see better years. My desire is to please Armenian fans with my success, because I am very happy seeing how happy the Armenian people are about our victories and my goals.

During this year you changed a bit, became more closed. The style of your interviews has changed too, you speak briefly.

I became closed and I give the same answers, as I am asked the same questions. Most of our journalists can not ask interesting questions to have an interesting interview. Therefore, most of the interviews are standard.

For example, I remember how you ducked away from the question about the team deserving the title of European Champions.

During the European Championships, I was rooting for three teams: Spain, Italy and the Netherlands. But in the final I wanted Italy to win. I wanted something new in football. It would be better if a team, not having victories for a long time, won the tournament.

You turn 24 soon. What changed in your way of thinking over the last year?

Growing up, you begin to experience life on your own. The way of thinking is changing as well. People begin to perceive life differently. The same book is perceived differently when you are 14, 18 and 24 years old. It is the same about life. It is a fairy tale and you start perceiving it differently.

Is life  a fairy tale for you?

On the one hand, you can say that life is a fairy tale, and we live the way it imposes its conditions. But on the other hand, life is a struggle to survive. Those who manage to earn their living do survive. Besides, life is patience. For example, a shop assistant must dream to become a manager. This happens in all spheres. I am a footballer and for me it is easy.  I have my own way. Here, too, there is a road which I have to take to go forward. Sometimes I think what I would do unless I were a football player.

You know that the Armenian fans love you, but there have been unpleasant rumors about your attitude towards the fans. In particular, it was said that in London, fans came up to you for a photo but you turned them down. During a match with Juventus, fans addressed you to help with getting tickets. In addition, in Sofia you refused to talk to the fans who came there.

It is untrue. In England, I was not approached. Only one guy came up. I asked him to wait. It was after the match when we had a team dinner. After that I went and took a photo with him. It is impossible that I could refuse to take a photo with anyone. After the match in Bulgaria rumors said I allegedly told fans “you caught a star and want a pic.”  I never call myself a star and, moreover, do not consider myself a star. I have never insulted or offended any fan who approached me with any request.  Even if the fans criticize me fairly, I would accept it. But I would never forgive if the criticism were ungrounded.

Prior to the match with Juventus, I was asked about the tickets. I told them to call Shakhtar and clarify information. I do not know the order of ticket sales.

How do the rumors emerge?

I do not know. Anything can happen. Each person can think something and go for a provocation. Everyone knows that I am not a man to ignore someone or to make a conflict. I am a very open person. I can listen to anyone, if I feel that it is useful.

Media outlets often write about your possible transfer. Are such questions pressing you?

It is nice when different clubs are showing their interest. I do read it on the Internet. Honestly, I am not aware of it. We can talk about possible transfer only when there is an agreement between the two clubs.

Ahead of the match against Italy, football functionary Dmitriy Selyuk said in an interview with NEWS.am Sport he is managing your deals. Meanwhile, you claim you do not know who is Selyuk. Where is the truth?

I said so because I was asked the wrong question. I was asked whether he is my agent. I said that I do not have an agent. Dmitri Selyuk is not an agent, he is a functionary protecting the interests of the players. I work with him and have good relationship.

When reading interviews of foreign players, I can see they do not hesitate to answer different questions about their position on the opposition rallies, the elections, certain events happening in their country. It is almost impossible to ask our players about such things? Why is it so?

You can ask me and I will answer. If I am asked a question I am competent to answer, I will tell my viewpoint. As to the mentioned topic, I can say I have been present at different rallies driven only by interest, just to see what is happening. I will not be here during the presidential elections [scheduled for February 2013 – ed.]. And I think that my vote will not change anything.

Speaking about you, they always pay attention to your intellect. You speak five languages. Taking into account a busy schedule, do you mange to learn or read something new?

I am admitted to the Yerevan branch of the St. Petersburg University of Economics and Finance. I have recently taken the books I need. You need to communicate with native speakers to learn a new language. It is very difficult to preserve the knowledge without communication.

Many of the players of our national team, including those who are younger, have already got married. Many people, especially abroad, believe that one has to make a career and then to get married. Do you think the marriage will affect your career?

You can combine the two. I wish all who got married happiness and children, but most importantly, I wish them to be able to feed a family. I think, I need a family too.

Who is your close friend in Shakhtar? Most of your photos are with Darijo Srna.

It is only about the photos. In fact, I have good relations with everyone.

Shakhtar is a team made up of players of different nationalities. Who is dear to an Armenian player?

You can say that you are the only Armenian footballer who has achieved great success abroad. What skills do you have that others lack?

Many people think that I have achieved great success, but I do not think so. Great achievements are still ahead. Each person must wait for a chance and use it in the right time. Armenians are good players, and they will achieve much if they know how to use their potential.

I want many victories for Armenia and also want to see Shakhtar in the Champions League semifinals. We have this potential, and I think everything is possible.

The most impressive moment of the year.

My second goal scored against Italy.

The most interesting book you have recently read.

I have recently started reading The Monk Who Sold His Ferrari, but  I will hardly have time to finish it this year. It is left for the next year.

Whom would you give Ballon d’Or?

This year, Iniesta deserves to win it.