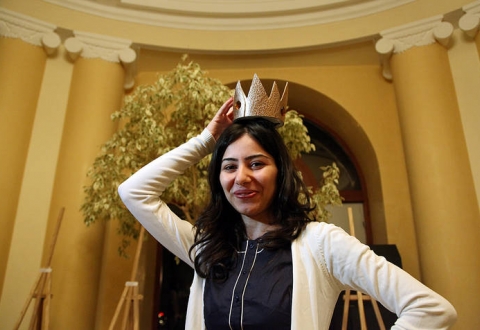 YEREVAN.- Armenian GM Lilit Mkrtchyan said Jermuk Grand Prix is a good opportunity for our team to prepare for the World Chess Olympiad to be held in Turkey.

Lilit Mkrtchyan met with the NEWS.am Sport correspondent on the margins of the FIDE Women’s Grand Prix held in Jermuk resort town from July 16 to 29.

Interestingly, Lilit’s first opponent at the tournament is her fellow teammate Elina Danielyan.

“The first game at any tournament, be it World Chess Olympiad or Grand Prix, requires more concentration than the following games. Elina and I have recently clashed in many Grand Prix tournaments. The majority of matches ended in a draw. It is very difficult to play against such opponent as we have been playing side by side for many years,” she said.

Lilit Mkrtchyan hopes she will make a good showing at the tournament and will spare no effort to achieve the best result.

In a month, the Armenian team will leave for Istanbul where they will participate in the World Chess Olympiad.

“Grand Prix is a good series to prepare for the Olympiad. We will have a training camp in Sevan and will play a friendly before the tournament,” she said.