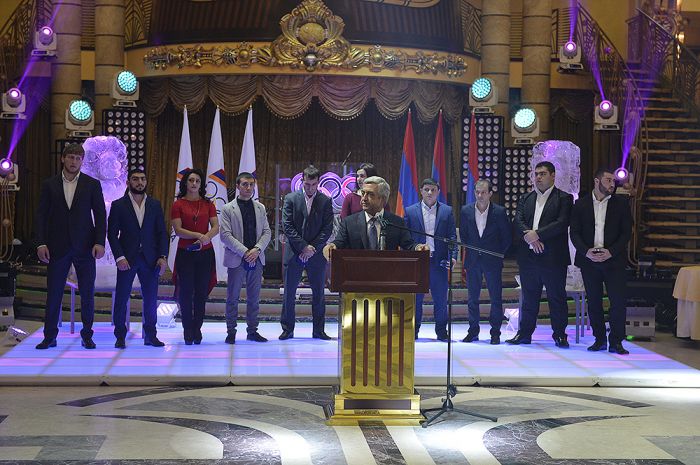 YEREVAN. - President of Armenia Serzh Sargsyan on Tuesday attended the ceremony of awarding the ten best athletes of Armenia. At the event he made an address, as reported by NEWS.am Sport correspondent Lusine Shahbazyan.

“The most important event of 2016 was the 31st Summer Olympics. Armenia presented itself in Rio Olympics with dignity. After a long break, you and we were able to bring the Olympic gold to Armenia. This is very honorable, and we all realize very well that this is the result of many years of hard work. Year 2016 was significant for the Armenian athletes and overall Armenian people in terms of great sports achievements. Different figures were mentioned here but I assure you that our athletes won 170 medals during the Olympic Games and the 2016 World and European Championships of adults, youths and juniors. This is a very good result, one of the collective work,” the President noted.

He also assured that the means spent on sports will continue to increase. In fact, the sport budget will grow every year given the athletes’ success, Sargsyan said.

“If there is a result, it should by all means be encouraged. I am glad that new gyms and sports schools are put into commission in Armenia every year, which is a rather important circumstance. When our wonderful athletes raise the flag of Armenia in different platforms, we feel very well. But the important thing is that they become symbols for our children and young generation. I can confidently say that Armenia has turned into a chess country, since we had Tigran Petrosyan. Armenian football is also developing. Of course, the Armenian championship does not proceed successfully enough, but I am sure that football has future in Armenia. Here are seated the Ararat-73 boys, who merely favor us with a sense of pride. I am sure that even the goal scored by Henrikh Mkhitaryan yesterday gave a sense of pride to thousands of youths and children. I am sure that upon seeing Artur Aleksanyan, all Armenian boys dream of at least once becoming an Olympic champion to deserve such an honor,” he stressed.

There were various people in Rio, who perhaps didn’t know where Armenia is located, but the Armenian athletes made the name of Armenia heard, Sargsyan added.

“I wish victories to the athletes and all of us in 2017. It is difficult to have high records without success in sport, but those high records can be achieved when preparing for them. Misfortunes also happen, for instance the case of Migran Arutyunyan. Those misfortunes should never discourage anyone but make them more principled in becoming stronger next time. Happy New Year and Merry Christmas,” Sargsyan said.