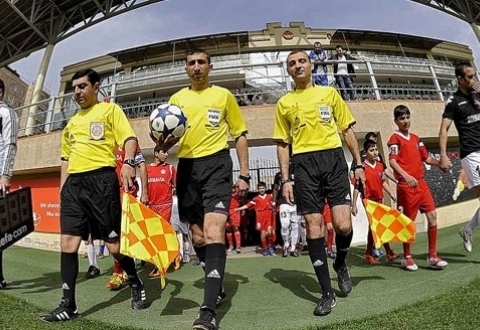 UEFA took note of the decision of the Armenian football federation with the regard to the referee and assistant referee who officiated at the UEFA Europa League first qualifying round match between FC Inter Turku and Víkingur on 11 July 2013, UEFA website reported.

During the Tuesday hearing, the federation imposed a life ban from football-related activity on two referees Andranik Arsenyan and Hovhannes Avagyan.

“UEFA is pleased with the excellent cooperation of the HFF [Armenian football federation], the local authorities and the betting operators during the investigation process.

Today, the chairman of the UEFA Control and Disciplinary Body has decided to suspend with immediate effect, and for any football-related activities, both match officials. At the same time, a disciplinary proceeding has been opened in accordance with Article 12 of the UEFA Disciplinary Regulations (integrity of matches and competitions, and match-fixing).

The case will be dealt with by the Control and Disciplinary Body on Thursday 22 August at the House of European Football in Nyon, Switzerland,” the statement reads.