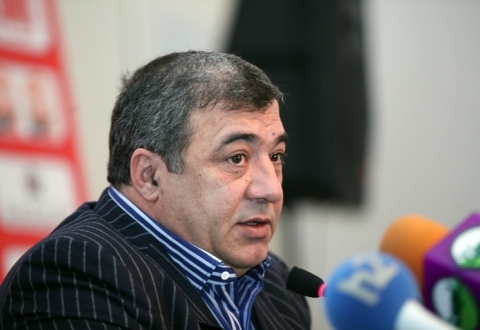 FFA President Mr. Ruben Hayrapetyan commented on the recent interview given by Dimitry Seluk to the NEWS.am Sport correspondent and directed to him personally.

I have repeatedly declared that for the sake of the development of Armenian football I am ready to collaborate with persons or organizations that want and are able to contribute to the progress of Armenian football. However, in the given circumstances how can he turn to me for cooperation when at the same time he is trying to criticize a person who has done and is doing everything possible for the advancement of Armenian football and for whom the success of Armenian football is above any personal interests? One should either be blind not to notice this or be totally unaware of football reality not to know the mentioned, or … you can judge yourself. How can a person who finds his being in football, often at the expenses of the players, judge people who make personal investments for the progression of football and do not save anything for the well being of the players. My words concern the well known businessmen Oleg Mkrtchyan and Suleyman Kerimov. While the first has undeniable contribution in the development of Ukrainian, Russian and Armenian football, Suleyman Kerimov gives his efforts for the progression of Dagestanian football, with this helping the rise of Russian football to a completely new level. Finally, how can I cooperate with a person who first declares to be Henrikh Mkhitaryan’s agent even never being in this role, and then announces that he has transferred Aras Ozbilis to FC Kuban, whilst I have personally asked Oleg Mkrtchyan to buy the transfer rights of Aras and talked to Aras and encouraged him to move to FC Kuban.

A person with a similar behavior cannot even have anything to do with me, let alone cooperate.

Taking into consideration all the above-mentioned, I would ask Mr. Seluk not to interfere in Armenian football and save Armenian football players from his so called “wars”. They have more important things to do, i.e. - playing football.