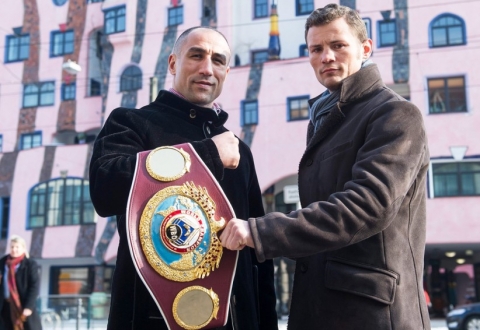 Fight rematch for the title of world champion of the WBO between Arthur Abraham and Robert Stieglitz will take place on March 23 in the German city of Magdeburg.

“I estimate my chances very high. Victory is a matter of honor. I always expect victory from the battle. I will do everything to meet the expectations of my friends, coaches, family and all Armenians,” Arthur Abraham said.

“I wish to return the champion belt at all costs,” Robert Stieglitz argued.

The coach of Stieglitz, Dirk Dzemski said they will not allow the history to repeat itself, “like when last August Abraham was celebrating his victory.”

“Arthur has noticeable progress in some aspects of the fight and he is ready to win in this fight rematch,” Abraham’s coach Ulli Wegner said.

Abraham-Stieglitz bout fight will be shown on German television ARD and the National Television of Armenia.