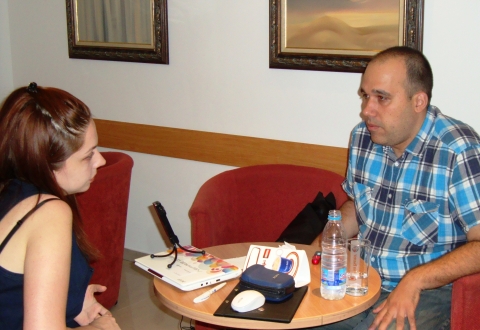 The Armenian national football team will play against the Bulgarian national in Sofia on Tuesday. The match is held within the World Cup-2014 selective round and caught the attention of Bulgarian journalists.

Asked what results are expected from the match, Aleksandrov said that he is looking forward for the Bulgarian national to win by 1:0 or 2:1 and believes that the match will be very interesting. In addition, the Armenian national will show a good play as well.

In response what Armenian players he knows, Aleksandrov said that he knows Mkhitaryan still from the times of FC Metallurg.

Asked who will occupy the first two places in the group, Aleksandrov said that Italy is a favorite.

“I also believe that the Czech and the Dutch have equal chances as Italians, while Armenia or Bulgaria will not occupy the first place. I do not even believe that Bulgaria can occupy the second place, while it is possible in case of Armenia,” he added.

To note, Bulgarian national was a very strong team before, while currently even the fans react negatively. Currently the number of the teams has increased for the participation in the European championships. It is good for teams like Armenia and Bulgaria but it hampers to the development of football.

Eventually, Aleksandrov believe that Messi is the best world player.