I am happy to see Armenia in London Paralympics – UK Ambassador 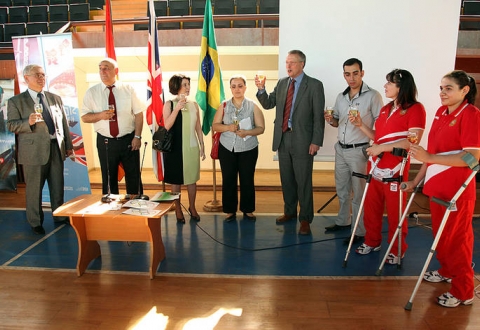 YEREVAN.-  UK Ambassador to Armenia James Aves said he is happy to see that Armenia participates in the London Paralympics which will kick off on August 29.

During the event dedicated to Paralympics held in MIKA sports complex, Ambassador said UK is doing its best to responsibly prepare for the Games.

The Embassy together with Bridge of Hope NGO organized an event dedicated to Armenian paralympians Greta Vardanyan and Margarita Hovakimyan. During the event James Aves handed over an Olympic flag to the Armenian athletes.

London Games created a wonderful atmosphere of the Olympics, Ambassador said expressing hope that the Olympic Games in Sochi in 2014, and Games in Rio de Janeiro in 2016 will preserve the atmosphere and the Olympic spirit.

James Aves confessed to supporting British athletes but said he “is confident that the Armenian athletes will honorably present their country”.