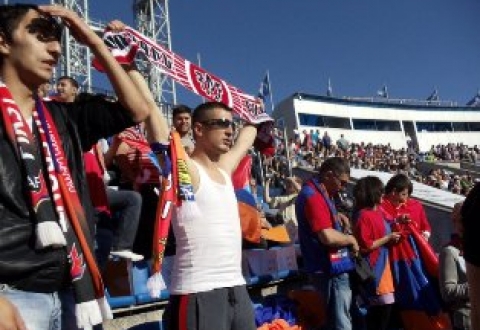 YEREVAN.- The First Armenian Front is a fan movement functioning in Armenia since 2007. The fans attend each match of the Armenian squad to support their favorites.

Asked what served a basis for the foundation of the movement, Janjoyan said that before the movement was founded Armenia had no organized group of fans to support the football team, while currently they exist. In addition, anyone above 16 can join the movement regardless of sex, age, or religion. Fans accompany the team during out matches at their expense or financial assistance of the Armenian Football Federation (AFF).

Janjoyan also said that their goal is supporting the Armenian team and cooperation is logically linked to the AFF.

“Without fans, the team would not have achieved such results,” he said.

Besides Armenians, there also are foreigners in the FAF, who support the Armenian football players of foreign clubs.

As for the future plans, fans will support Armenia during the matches against Bulgaria and Malta.

“The most important match will be against Italy. We should do everything for the team to be supported not by one tribune but a whole stadium,” he added.