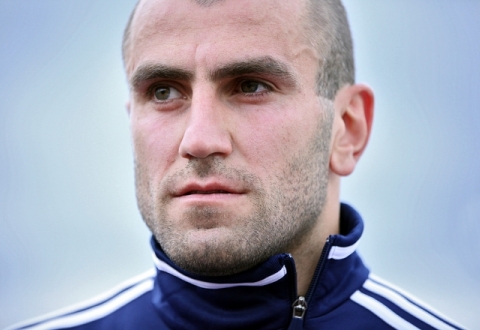 One of the leading players of the Armenian national and Krasnodar forward Yura Movsisyan joined the team trainings ahead to the friendly matches against Greek and Kazakhstani teams. As a matter of fact, he scored 4 goals in 12 matches for the national team.

At the same time he does not feel tired after the season in Krasnodar. Movsisyan managed to have a rest and regain shape, as each football player gets accustomed to the lifestyle he has. Currently he gets prepared for the upcoming two matches, Movsisyan said in an interview with NEWS.am Sport.

Asked whether he feels like a leader of the club after the season, the Armenian player said that in case of each forward, who scores goals, the club has big hopes. Besides, all the players should feel like leaders and it should be displayed in the match as well.

As for the rumors that Movsisyan is going to leave the club after the Russian championship ends, he said that he has agents and it is their job, he does not interfere in these issues. Currently he plays for Krasnodar, he adds. Regarding his successes in the club, he never gets satisfied with what he has achieved. At the same time he cannot say that his family got accustomed to life in Krasnodar city. It is difficult for Movsisyan to live there with family.

In addition, there is no difference for Movsisyan between friendly and official matches. If the team does not hold official matches within the frameworks of the European championship qualifying rounds, it does not necessarily mean that the match is of another character. All the matches for the national are of vital importance and the players always play for victory.

Movsisyan believes key favorites are the French in the Euro-2012, as well as German and Spanish teams.