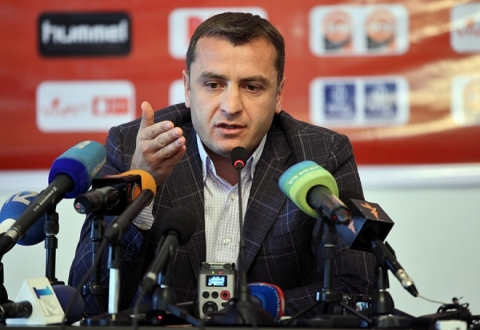 Armenia’s national will try to use new tactics during upcoming friendly matches against Greece and Kazakhstan, manager Vardan Minasyan told reporters on Friday.

Mr. Minasyan, you said that the Armenian team in one of the next meeting will attempt to use the 4-1-4-1 formation. Are you trying to introduce new tactic?

We have already played in similar formation. The tactics of the game is selected depending on the players that are available. If we are going to play a 4-1-4-1 with midfielders Arthur Yedigaryan and Karlen Mkrtchyan, it means that we rely on defensive tactics.

If Marcos Pizzelli plays instead of one of these players, tactic becomes aggressive. It is important the choice of players and the performance of their task. Schemes are important, but footballers, not formations, are playing in the field.

Are you worried about the lack of match practice of two central defenders of the Armenian team Hrayr Mkoyan and Robert Arzumanyan?

Of course, I do worry about it.  It is obvious that without match practice, the guys will be ready only for 70-80 percent. But we have what we have. If there were player to replace them I would have invited him. But I do not see a person who could replace the guys, even if they are not in their best shape.