2014 World Cup: Argentina have no chance in final – Robben 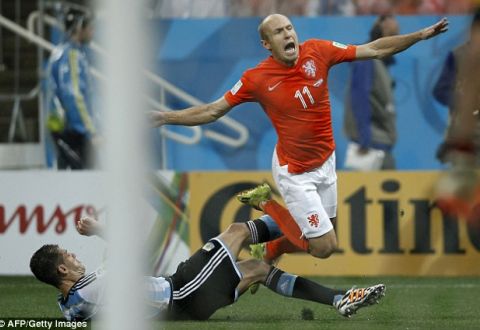 After losing to Argentina in a penalty shootout in the 2014 FIFA World Cup semifinal in Brazil, Dutch national football squad and Bayern Munich (Germany) midfielder Arjen Robben stated that the South Americans have no chance to win the final against Germany.

“A penalty shootout is not solely a game of chance, which we [the Netherlands] proved in the game against Costa Rica. [But] this time the penalty shootout didn’t bring us success. In addition, we had a little bit of bad luck.

“We played well, and this tragic defeat likewise is a part of football. I’m confident [that] Germany will become the world champions; Argentine have no chance in the final,” Voetbal International quoted Robben as saying.

Argentina will face Germany in Sunday’s 2014 World Cup grand final, whereas the Netherlands will enter the pitch against the hosts, Brazil, in Saturday’s bronze-medal match.