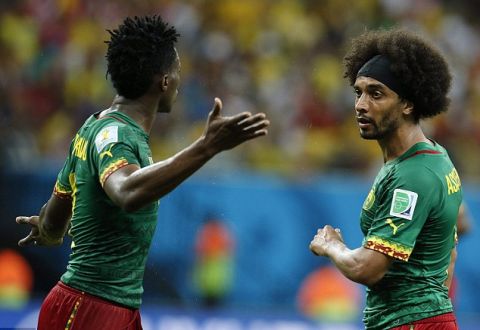 Cameroon national football squad and Tottenham Hotspur (England) defender Benoit Assou-Ekotto let his frustrations boil over as he headbutted his Cameroon teammate Benjamin Moukandjo in the closing stages of their 4-0 defeat by Croatia in the group phase of the 2014 FIFA World Cup in Brazil, the Daily Mail reported.

Cameroon were trailing 4-0 in injury time when Assou-Ekotto lashed out at his teammate and, subsequently, he headbutted Moukandjo. The game referee, however, did not see this incident, and therefore Assou-Ekotto evaded punishment. But the Cameroon international’s anger continued after the final whistle, and Cameroon captain and Chelsea FC (England) striker Samuel Eto’o was forced to restrain him in the tunnel.As a result of their second defeat in the group stage, Cameroon have lost the chance to advance to the World Cup playoffs.