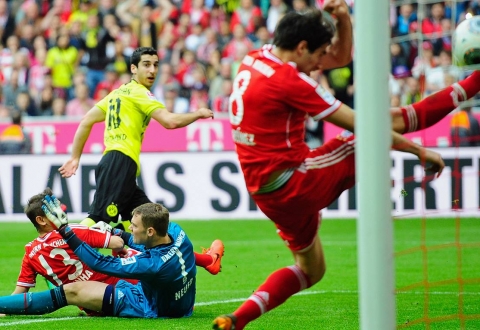 Very few people would have liked to be in Mkhitaryan’s shoes after his unsuccessful UEFA Champions League match against FC Real Madrid (Spain).

Championat.com wrote the aforesaid commenting on Armenia national football squad and Borussia Dortmund (BVB) midfielder Henrikh Mkhitaryan’s successful performance in his club’s German Bundesliga clash against FC Bayern München. “Such things happen frequently with Henrikh, but he proved that he can withstand such blows. Mkhitaryan himself opened the scoring in Munich, and his goal became the game-winning.

“It seemed that BVB would be unable to withstand Bayern. The win against Real, however, freed the Dortmund players from fear, and they showed Bayern a resistance which Bayern did not expect,” the Russian website wrote. Borussia Dortmund won by a score of 3-0 on the road against Bayern München, and the Armenian international netted the guest team’s first goal thereby making his Bundesliga goal tally reach seven.