We are not happy with result of game against Armenia 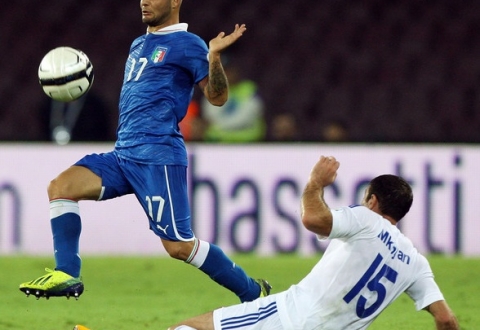 “It was certainly emotional, as it was my first senior Italy game at the San Paolo [stadium in Naples]. I thank the fans for chanting my name,” stated Italian national football team and S.S.C. Napoli winger Lorenzo Insigne.

The player commented on Tuesday’s last 2014 World Cup qualifier group match between Italy and Armenia, which ended in a 2-2 draw in Naples, Italy.

“The fact we ended [the qualifiers] unbeaten gives us confidence, though we are not happy with the result. It’s important we didn’t lose and kept trying till the end,” he said.

Insigne almost scored on several occasions, hitting the woodwork and skimming the upright after a sensational turn.

“It was a good move, but I wanted to score tonight. If I had scored from there it would’ve been amazing,” Football Italia quotes Insigne as saying.

To note, the Italian international provided an assist in Tuesday’s match against Armenia.

After all ten rounds in the World Cup qualifiers Group B, Italy have booked their spot at Brazil 2014, with 22 points, Denmark came second, with 16 points, the Czech Republic were third, with 15 points, Bulgaria and Armenia came fourth and fifth, respectively, with 13 points, and Malta are in last place, with 3 points.