Italy vs. Armenia preview by Goal.com 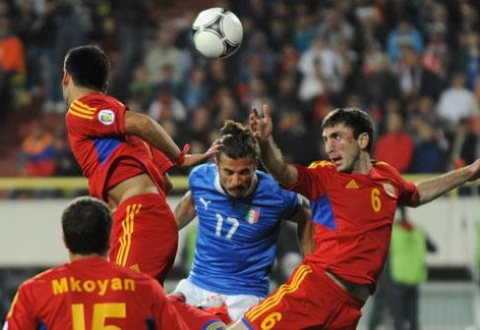 “[Manager] Cesare Prandelli’s already-qualified [Italian] side put in a disappointing performance against Denmark on Friday [October 11] but will be hoping to make amends in Naples,” Goal.com reports.

“Armenia play their final World Cup qualifier with a chance of making the play-offs, but face a tough trip to Group B winners Italy.

“The scenario is unlikely as it would require Bulgaria and the Czech Republic to draw - with Denmark also failing to beat bottom-placed Malta - while they win in Naples to secure one of the eight best runners-up spots.

“Armenia have been inconsistent throughout their qualifying campaign, winning four but losing five of their nine fixtures, but a 2-1 home victory over Bulgaria on Friday [October 11] ensured they kept their hopes of reaching Brazil 2014 alive.

“In terms of team news, Spartak Moscow forward Yura Movsisyan is set to lead the line for Armenia.

“The 26-year-old has three goals in qualifying so far, and will look to provide the attacking threat in Tuesday's fixture, while Borussia Dortmund playmaker Henrikh Mkhitaryan is also likely to start.

“Italy, who won the 2006 World Cup, have enjoyed a comfortable campaign in Group B, winning six and drawing three of their nine games to secure automatic qualification.

“Milan striker Mario Balotelli - who missed the 2-2 draw with Denmark on Friday [October 11] - has remained with the squad despite suffering from gastroenteritis.

“Meanwhile, Southampton forward Pablo Osvaldo is likely to once again start up front and will look to add to the goal he scored against [Denmark coach] Morten Olsen’s outfit.

“Italy are looking for a second qualification win over Armenia, after triumphing 3-1 in the away encounter [in Armenia’s capital city Yerevan] in  October 2012,” Goal.com writes.