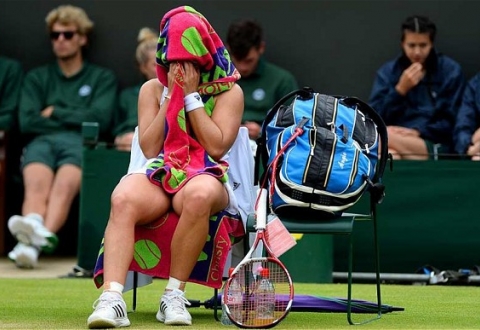 Angelique Kerber was the victim of vitriolic abuse on social media on Friday night after blowing a winning position at Wimbledon, The Telegraph reports.

Last year’s semi-finalist from Germany was two points from victory in her second-round match against Estonia’s Kaia Kanepi after winning the first set and storming to a 5-1 tiebreak lead in the second. However, the seventh seed then lost six points in a row, allowing Kanepi to kick-start an amazing fightback and win.

The manner of the defeat led to a flurry of abusive messages posted on seventh seed Kerber’s Facebook page, with one visitor positing that he wished she was dead.

The message included vicious swearing and ended: “5-1 in tie brejk and u lost it i wish u dead.” The same poster labeled Kerber “retarded” and said, “can u burn in hell ... leave the tennis pls do it just for me kanepi beat u shame on u.”