Every Armenian considers self a champion of chess – President Sargsyan 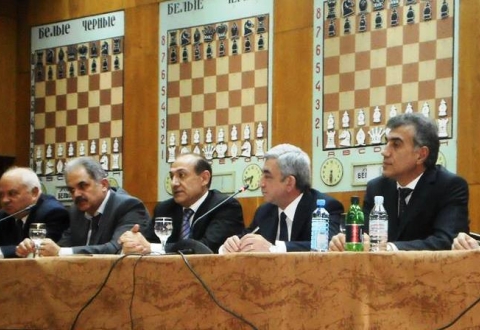 YEREVAN. – “Today, we are the reigning [world] champions [of chess]. Our boys enable us to speak about these achievements in the plural form. Every Armenian considers self a champion of chess.”

“Ever since 2011 to this day, our chess organization has achieved outstanding success. I will distinguish three of these accomplishments. In 2011, our team won the title of World Champion in China, [and] subsequently, our boys’ team became Olympiad champions in Turkey,” Sargsyan said.

I his turn, First Vice President Smbat Lputyan of the Armenian Chess Federation presented the third accomplishment, which is the inclusion of chess as a study subject in the secondary schools of Armenia.

“Armenia was the first [country] to be able to include chess in the curriculum of secondary schools,” Lputyan stressed.

“This is an equivalent process to the feats of the boys,” Sargsyan added, in his turn.

Reflecting on the achievements of the Armenian women’s national team, the Armenian Chess Federation President specifically noted as follows:

“With their accomplishments, our girls fall a little behind our boys. But I hope there will come a day when we will speak about our girls [likewise] as world or Olympiad champions.”