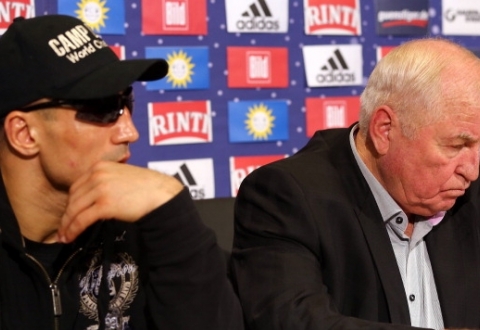 During the news conference following Saturday’s fight that was held in Magdeburg, Germany, Abraham, 33, demanded a rematch from Stieglitz, 31.

In Saturday’s bout, Abraham was defeated, by technical knockout, to former champion Robert Stieglitz of Germany, and thus Stieglitz regained the champion’s belt. Abraham suffered an eye injury as a result of the hits he received. At the end of Round 3, the fight physician checked Abraham’s swollen eye and, as a result, he stopped the fight.  Arthur Abraham suffered his fourth defeat in professional ring.

To note, Arthur Abraham and Robert Stieglitz had first faced one another in Berlin on August 25, 2012, and the Armenian boxer was declared the winner by unanimous decision and he took the WBO Super Middleweight Champion’s belt from the German fighter. But in line with the fight contract, if Abraham had won the bout, he was obligated to hold a rematch with Stieglitz.

Print    |  Հայերեն  |  На русском
Thank you for your comment. Your comment must be confirmed by the administration.
arayik  13:07-24/03
մեք քեզ շատ սիրում և հավատւմ ենք քո հաղթանակին, միայն հաղթանակ.....
saro 18:05-24/03
Axper jan duxt chgces ASTVAC QEZ OGNAKAN....
karina 00:30-26/03
mne 54goda i blagodarya Arturu Abrahamu, ya polyubila boks. Bales, chnexves, du het kvercnes gotin. es u shat [email protected] kaxoten ko hamar. ASTVAC KO HET
Kelvin Pompey 20:33-26/03
Why? He did absolutely nothing in this fight. From round 1, all he did was cover up way before the barage of punches by Stieglitz as if that was his gameplan. He deserved to have both eyes swollen. What a dumb fighter! He still feels he can come back late because of the Jermain taylor knockout. If i was his corner, I'd make him pay me double for wasting my damn time.
last news on "Arthur Abraham"
Total votes (13)