Robert Stieglitz : Audience will support me during bout against Abraham 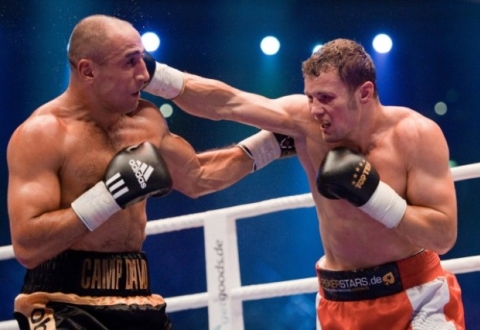 Former WBO super middleweight champion Robert Stieglitz is confident Arthur Abraham will be considered a favorite of the upcoming bout since he is a current world champion. However, Stieglitz relies on the support of the fans in Magdeburg, he said in an interview with NEWS.am Sport ahead of the March 23 bout against Abraham.

Six months have passed since last year's match. How did you spend this time? Did you have time to recover?

Yes, I was able to fully recover. We analyzed the fight with coaches, worked on the mistakes. We have found some problems and are preparing for the fight.

Can you say that you are physically and mentally ready for the fight?

Yes, I was mentally ready long ago. Last week I had sparring sessions and now I am ready physically.

We can imagine, how you are preparing physically. I would like to know how you are setting yourself mentally. Do you have a special method for this?

There are people with whom I work. They give me advice, and I trust them. Good music always inspires. My friends, brothers, cousins ​​always give me something positive. My girlfriend always supports me. Many fans from Russia and Kazakhstan will come to the bout. They are also supporting me.

After the August match, you said there was biased refereeing. Did you really think so or it was said rashly?

Perhaps, rashly. I was a world champion, and it was an equal match. They usually give points to the champion in case of equal bout. His audience helped Arthur. But I still can not say that I lost the fight.

Abraham said that you congratulated him on well-deserved victory after the fight. Did you?

Yes, I came up to him and congratulated. We are normal athletes who have to respect the decision of the judge. Why should I challenge? It is sport and we must respect the ethics.

Last year, despite the fact that you were the reigning world champion, the bookies and experts gave preference to Arthur. Who do you think is the favorite now, given that you will be boxing at home?

I can say that everything is a little mixed, but as Arthur is a world champion, he will be considered the favorite. We will box in Magdeburg, at home. The public will support me, and I hope it will help me. I can say our chances are 50-50, but again he will have preference since he is a world champion.

You said that the coaches were discussing your mistakes. Were there many mistakes?

I do not want to talk about mistakes. It is better to work than talk about them. Arthur had a good fight. Mistakes will always exist. My injury played an important role.

Arthur and I, we’ve been in this business for a long time. We do not pay attention to such things. We know we have to fight and will give anything for that. We would hardly achieve anything just with behavior.