Interview with Levon Aronian: I am proud to be Armenian 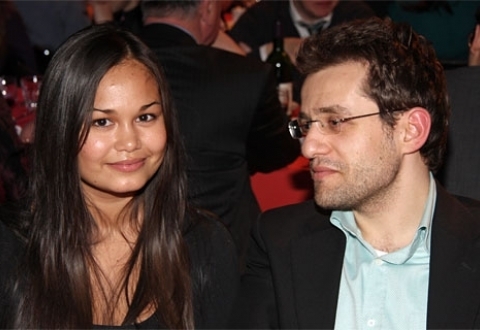 YEREVAN.-  Levon Aronian is very proud to be born in Armenia. “We have given the world a lot, but at the same time, I do not think that we always have to demand the copyright,” he said in an interview with NEWS.am Sport.

Levon, you always say that you find calmness in music. Does it happen than you isolate yourself prior to any tournament and stay alone with music?

I always like that. I am not a fanatic, but in matters of music I have fanaticism. Because of music, I get the concept of “divine” or “universal”.

You're a jazz fan. What is the genre that brings you peace?

I will not single out anyone. For me, John Coltrane is everything! He is my faith. I can not say what kind of music he plays. You must feel it in yourself.  I also like folklore. No matter what country music: Armenian, African, Turkish or Azerbaijani. If you find something in common with the musician, it is wonderful.

Levon, you were always proud of their nationality, but at the same time you are a cosmopolitan. Do you like listening to the Turkish and Azerbaijani music, or like eating their food? The centuries-old feud between Armenians and Turks also reflected the culture.

I would not say that I am a cosmopolitan. I am very proud that I was born in Armenia and feel Armenian. At the same time, I am proud that I can have fun, regardless of the name and labels. You can play music and entertain people, not telling him what country this dish comes from. He can enjoy it without knowing where it came from. I do not accept the idea that there are things that should be accepted and things which can never be accepted. This is ours, and that belongs to them. I am very proud of my nation with its ancient history. We have given the world a lot, but at the same time, I do not think that we always have to demand the copyright to it. When I see these symptoms in different people, I understand that it is not very civilized. We should be proud of our culture, but not make an idol of it. Well, when you share your culture with others, it is much more pleasant. I often tell my friends or show something and say it is ours, but I’m not sure whether we have created it or taken from other people, but it is Armenian. I do it and say - this is from the area.

There were rumors about creating pan-Armenian chess tournament, where all strong Armenian players could participate. Would you participate in the tournament?

It would be great to organize such a tournament. We always had the idea to make Armenian championship stronger. But during the year it happens that we do not have time to participate in several tournaments, because we still have to rest.

Levon, how can we help you?

Armenian people are doing everything for me. I feel this warmth. People appreciate our work. It has always been my dream, and I think every player dreams about it. In other countries, chess players are not treated as in our country. I have not seen such attitude in other countries. We are very pleased to feel this attitude.

You have recently posted on Twitter a photo of dolma cooked by Ariana. This photo was quickly spread all over the internet and received very warm reviews. What other Armenian dishes can Ariana cook?

She loves to cook different dishes. My mother had taught her a lot. She likes to cook not only Armenian dishes, for example borsh [soup of Ukrainian origin] and eggplant with nuts.

I have not eaten meat for 12 years. Mom cooks pasuts dolma [dolma without meat – ed.] but Ariana has not learned how to cook it. This is the next step.

Are you a vegetarian?

No, I eat fish. Simply, at some point I began to think that the animals whose meat we eat, are very close to people. I have this bad feeling since childhood, when I was in the countryside and saw how they killed animals. But I have not seen how they kill fish (laughing).