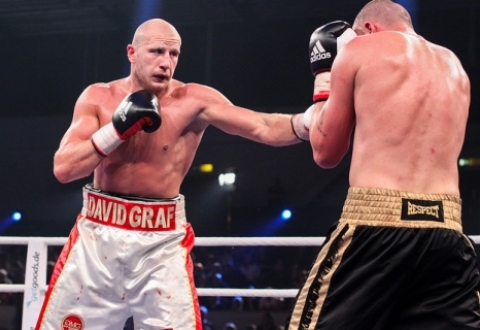 David Graf (Vahagn Sahakyan), the 23-year-old Armenian heavyweight boxer, achieved his ninth professional win in a fight against Blanchard Kalambay of France, which took place in Germany on November 3. Graf defeated his opponent on points.

NEWS.am Sport interviewed David Graf, and below is an excerpt.

This was your ninth bout. What will you say about your opponent?

The fight was really difficult. The French boxer was a very awkward opponent. He made a strong head-but to my eyebrow and [as a result] it was cut.

They put several stitches on my eyebrow after the fight. It was a serious cut, but it did not stop me from continuing the bout. My opponent was strong. He received powerful punches from me, but he endured.

After the weigh-in a day earlier you stated that your opponent was afraid to even look into your eyes.

That was the case. I saw the fear in his eyes and became convinced [of it] when he did not look me in the eyes. In boxing, the fight begins with the official weigh-in.

I always have that self-confidence because I’m always in good shape.

Just like in all of my other fights, I felt like the ruler of the ring from the very beginning in this case, too. This was my first eight-round fight. I didn’t win by a KO, [but] I fought until the end.

To note, this was David Graf’s ninth professional fight. He is undefeated so far, and six of his wins have come by way of KOs.

Graf’s fights stand out by their quick end, and one of his bouts was the world’s fastest-ending, with a third-second KO.