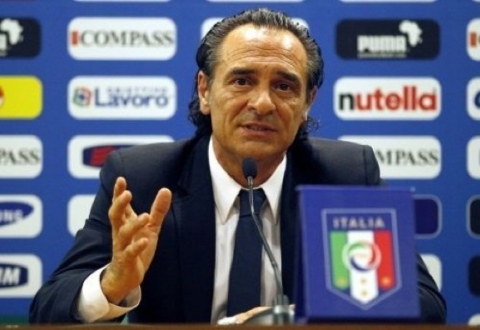 How would you assess the qualification group of the Italian team in this tournament?

After these first two rounds the Group B standing gives evidence of a very balanced pool to hold three Euro 2012 finalists as Italy, Denmark and Czech Republic, and two rampant teams as Armenia and Bulgaria that can compete to win and then go through directly. It’s a tough challenge for everybody.

How would you qualify the potential of your rivals and which team is your most dangerous competitor?

I’m not used to rank our opponents, Italy’s positive performance at Euro 2012 gave supplementary motivation than usual to everybody else. As I’ve mentioned before there are five teams able to compete for the first place.

Globalization and TV visibility took out lots of secrets from football teams. We’ve got information as our Armenian opponents have. I do consider them a tough team, especially when to be played at its home ground: solid on many points of view, tactically well organized and balanced, provided of plenty of options in the offensive area. They deserve to be considered amongst the five candidates to qualify.

If you are familiar with the Armenian national’s players who would you set aside?

Henrik Mkhitaryan is the most talented player as he has recently confirmed during the Champions Leagues stages. He has the vision to play both as midfielder and forward with same quality and efficiency. But the question for me is how to stop him on the pitch instead of thinking whether he will miss the game or not.

Your team played with different squads in different Euro-2012 matches and managed to reach the final. Does this mean that the competition in the Italian team is fierce?

It means that our aim to provide our team of a tactical flexibility was at a good point. You get this results when your guys’ attitude inclines to generosity for the benefit of the game and its spectators.

A new generation of players is being included in the Italian team under your headship. Taking into account that Italian team is one of the best teams in the world, don’t you think that you somehow take risk?

When I’ve been appointed at the helm of the National team two years ago, after a bad performance at the FIFA World Cup 2010 our mission was focused on a significant renovation to be completed on a four years basis aiming to get the Italian football back to the ranking its history deserves. We’re just half-way of our track and there’s nothing risky when you’re looking for new options and different solutions, you have to be realistic and ambitious instead when designing your future by great determination.

After the match with the England you said you did an experiment in order to test some players. Will the squad undergo any changes during the qualifiers?

A friendly match is very important test for us, I did never consider it as a mere experiment but a great opportunity instead to understand whether my team could be provided of any further potential talent. The recent selection of Mattia Destro, Federico Peluso and Lorenzo Insigne for the Qualifying round are evidence that since then works were already in progress.

How would you assess the Bulgaria v Italy qualifier (2-2)?

We didn’t perform before our real potential in Sofia, this used to be happen in the early stage of the season for almost any Italian team. This won’t take out any merit Bulgaria deserved, they have played a very solid game with plenty of quality as their second match fully confirmed.

What would you wish Armenian fans?

To come over and enjoy this spectacular match with lots of positivity and enthusiasm.