Armenia’s Aronian: I never wanted to play under flag of another country (PHOTOS) 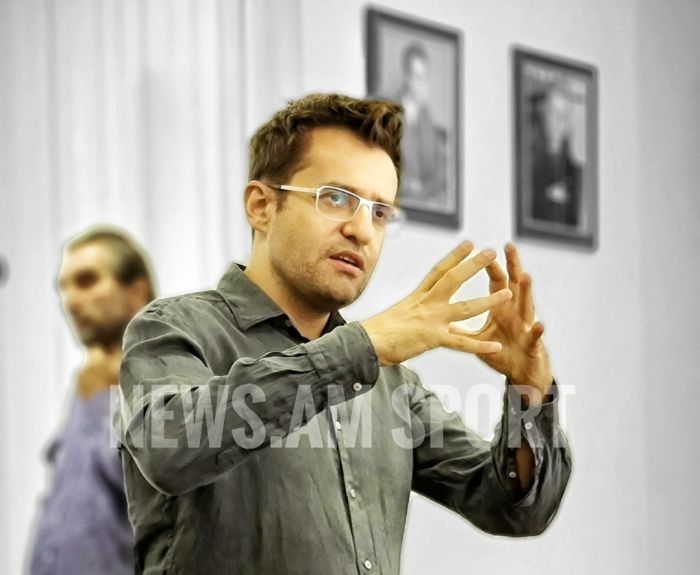 YEREVAN. – I never wanted to play under the flag of another country. Three-time World Chess Olympiad champion, two-time World Cup winner, chess grandmaster (GM) Levon Aronian, who will leave for the US on September 6, said this in a conversation with chess players and reporters. The leading chess player of Armenia is moving to the US and will represent that country from now on.

But before leaving, the grandmaster met with the students at his and GM Gabriel Sargissian’s chess school. During the talk, one of the students of the school asked Aronian if he had ever wanted to play under the flag of any other country but Armenia. "I never wanted to play under another flag. There is no sweeter flag for me than our flag. Unfortunately, it will happen; but I cannot say that it happens by my wish," Aronian responded.

And during the briefing with the reporters, the grandmaster stated that he was leaving Armenia, but was not saying goodbye to anyone.

"The get-together with the children was not a farewell. It is not that I am leaving for the US and I will not come [back] to Armenia, I will not visit the school anymore.

In 2018, the rather strong school was shut. Prior to that, the school operated with state funding. During that time we had losses among the coaches. Many left the country, a very good coach died.

After a long break, the school reopened, for which I am very happy. (…). Very strong coaches, my two personal coaches with whom I have worked for many years work here. This is the best opportunity for children to work with the strongest coaches in the world for free because there are very few such precedents.

I really want the girls to [also] play chess, achieve success. (…). We, understanding the importance of chess for the development of the Armenian nation's mind, must use every chance. At this moment we are given the opportunity, and our school is functioning.

We all need human treatment; us, chess players, do not need anything else. I am always in touch with young people, I try to follow their progress. It will be so also after leaving for the US. I will do everything to pass on my knowledge to our children.

I am leaving for the US on September 6 at 3:50am. I still do not know whether I will represent Armenia at the [Chess] World Cup or not; but probably not. I am sad about that fact," said Levon Aronian.