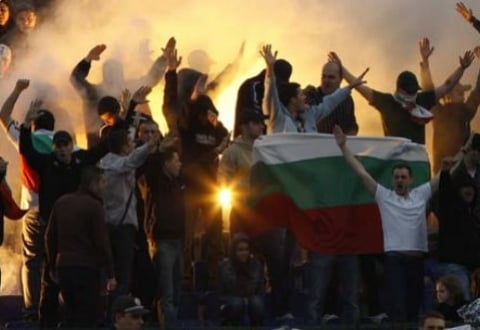 The national football squad of Bulgaria could be punished for the conduct of their fans.
During Tuesday’s match between the national teams of Armenia and Bulgaria, the latter’s fans had shouted “gypsies” at the Armenian fans, sportal.bg informs, referring to Meridian Mach.
According to the source, Armenia’s national squad already filed a complaint to the International Federation of Association Football (FIFA). Also, the Armenian side appealed the two red cards which the game referee had shown to Marcos Pizzelli and Gevorg Ghazaryan.

If FIFA determines that the Bulgarian fans’ conduct can be characterized as racism, the Bulgarian national squad could play two matches in empty stadium.

As NEWS.am Sport informed earlier, the 2014 World Cup Brazil’s qualifying Group B match between Armenia and Bulgaria was played in Sofia on Tuesday, and the Bulgarians defeated the Armenians by a score of 1-0.
After two rounds, Italy and Bulgaria head the group with 4 points apiece. Armenia has 3 points while the Czech and Denmark have one point each. Malta have not yet earned any points.