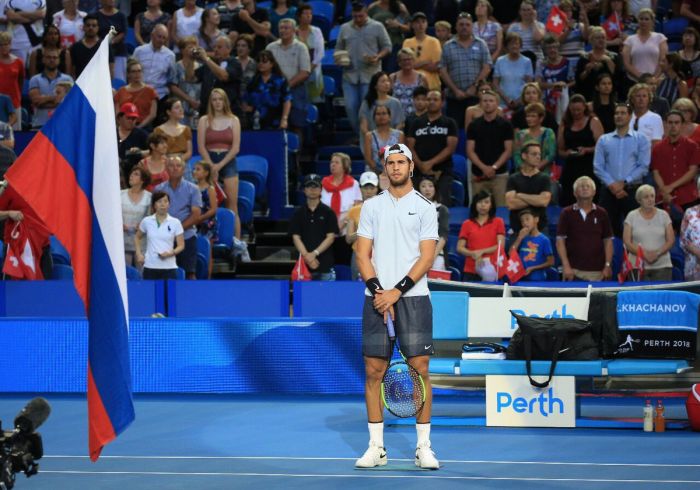 NEWS.am Sport talked to one of the leaders of the Russian national tennis team, 21-year-old player of Armenian origin Karen Khachanov, who is ranked the 50th in the ATP ranking.

Karen, let's start from the very beginning. Tell us about your Armenian origin. Where were you born and what do you know about your roots?

Why did you choose tennis?

I started training when I was 3 years old. I began to play more and more, and at the age of 12 had a desire become a professional tennis player.

What is the most attracting about tennis?

Everything. This is an individual sport - you are alone on the court, and everything depends on you only. This is a test of your character, your self-control and willpower.

Which surface is the most convenient for you?

I like to play on clay courts and hard courts, but I try to improve my game on all surfaces.

Who was your first coach in big sports? Do you keep in touch with him?

I try to keep in touch with all my former coaches, and from this year I started working again with Vedran Martic, a Croatian coach who trained me from my youth.

You used to work with a Spanish specialist. Right shot is typical for Spanish players, for example Rafael Nadal.

I worked with the Spanish coach Galo Blanco for four years, but my shot to the right, I think, is not like that of Raphael Nadal.

Now you are the 50th in the ATP rating. Could you imagine that your tennis career will develop so successfully?

I worked hard to achieve the results that I have at the moment. But my main goal is to be the first.

How hard do you suffer a defeat?

Of course, no one likes to lose. But I try to make the right conclusions after the defeats, in order not to repeat mistakes in the future. There are no victories without defeats.

What can cause disappointment?

The reason for disappointment in tennis may be unrealized opportunities.

How would you assess 2017 in term of your career?

The year 2017 was unstable for me. There were great victories and poor defeats. However, from the point of view of the work I did, the accumulated experience and progress, the year can be considered positive.

What will you remember about 2017?

I will remember the good results, for example advancing to 4th round of Roland Garros, the third round of Wimbledon, as well as matches against the legendary tennis players of our time.

You reached the 1/8 finals of Roland Garros for the first time in your career. You defeated Tomas Berdyh in the second round. What did you feel?

I played this game at a high level, that's why I achieved a victory in three sets. In general, Roland Garros is one my favorite tournaments of the Grand Slam. I would like to win it one day.

What did you need to defeat Andy Murray?

I did not have enough experience in the key points of the game. By the time, I did not have a lot of games against the top players.

Who is the source of your inspiration among present and former players?

What relations do you have with the members of the Russian national team and the head coach Shamil Tarpishchev?

At the moment I’m playing the second number. I have very good relations with them.

When did you last visit Armenia and what was the goal of your trip?

Last time I was in Armenia in 2010. I came to participate in the tournament and to see the country. Unfortunately, I had a busy schedule, and I am not able to visit Armenia more often. I know the captain of the Armenian team in the Davis Cup, and several other guys. We have good relations.

I think this is impossible, since I was born in Moscow and lived all my life in Russia. But, I also love Armenia so much. I respect my roots.

When are you going to visit Armenia?

At the first opportunity.

Your biggest dream in big sports?

To number one and to win the Olympic gold. I wanted to finish the season in the top 10, but it did not happen. My main goal remains the same, but I do not want to set any time frames. I want to focus on the work, and let's see where it could lead me.

I know that you are married. How do you combine family and sport?

Easily. My wife accompanies me during the tournaments and supports me in everything.

Do you consider yourself to be a happy person? If you were given a chance to be born again, what would you change in your life?

Yes, I consider myself to be a happy person. And I would not change anything.