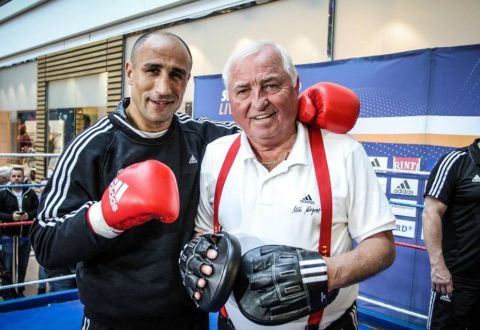 Ulli Wegner, the coach of Armenian boxer Arthur Abraham () who is the reining WBO Super Middleweight Champion, has kissed Abraham for the first time in eleven years.

The German specialist was so impressed by 34-year-old Abraham’s triumph over Paul Smith (UK) that he could not hold back his emotions, Bild reported.

“Arthur, I’m finally proud of you,” Wegner told Abraham after the fight.

“I fought as my coach expected of me. Training with Wegner is not a pleasure, but a prison torture. But for me he is the best coach in the world,” Abraham said after recording his 41st win in professional boxing.

In the bout, which was held in on September 27, Arthur Abraham defeated 31-year-old Smith on a unanimous decision by the judges, and defended his WBO Super Middleweight belt for the second time.