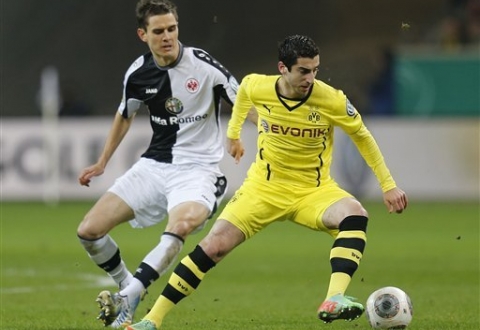 The Ruhr Nachrichten website of Germany reflected on Armenia national football squad and Borussia Dortmund midfielder Henrikh Mkhitaryan’s performance during his club’s German Cup quarterfinal away match against Eintracht Frankfurt on Tuesday. “Mkhitaryan played with greater ease after the successful game against [SV] Werder [Bremen on February 8]. “The midfielder with an ‘engine’ did a great job, and he stood out with acute actions. Solely the scoring opportunities were not enough for him,” the website writes.

Ruhr Nachrichten also gave the highest evaluation, that of 2.5 points, to the performance of the 25-year-old Armenia international. Dortmund defeated Eintracht by a score of 1-0 and advanced to the semifinals. Mkhitaryan played in BVB’s starting eleven for 89 minutes. Gabon international and Dortmund striker Pierre-Emerick Aubameyang scored the game’s sole goal from a corner kick by Henrikh Mkhitaryan.