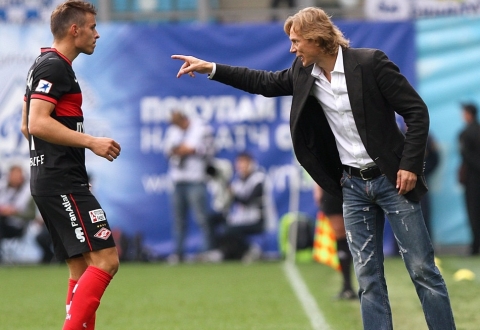 Ozbilis did not train, did not sleep, and he became nervous for one week, stated FC Spartak Moscow Manager Valeri Karpin.

Following Spartak’s away match on Saturday against Dynamo Moscow in the new season of the Russian Premier League football, the Russian specialist reflected on Armenian national football team midfielder and Spartak newcomer Aras Ozbilis, who entered the pitch for the first time as a Spartak player.

“He hit the horizontal goalpost; it is good. Ozbilis did not train, did not sleep, [and he] became nervous for one week. We were taking a risk by making Aras enter the pitch, albeit we did that in the last twenty minutes [into the game]. He entered the field and showed a worthy game, playing well in defense, too,” Karpin said on the air of Nash Football (Our Football) television.

To note, FC Spartak Moscow defeated Dynamo Moscow by a score of 4-1. Armenian national squad and Dynamo goalkeeper Roman Berezovsky and Armenian international and Spartak forward Yura Movsisyan, however, were among the substitutes of their  respective clubs.

Print    |  Հայերեն
Thank you for your comment. Your comment must be confirmed by the administration.
last news on "football - Russian Premier League"
Total votes (13)