I will take back my title from Arthur Abraham – Robert Stieglitz 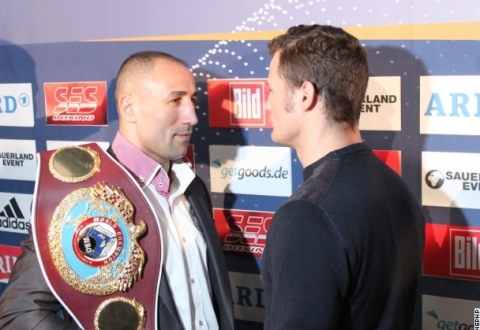 “I only borrowed him my title, now I want it back!” stated former WBO Super Middleweight Champion Robert Stieglitz, who will fight a rematch against the current champion, Armenian boxer Arthur Abraham, in Magdeburg, Germany, on March 23.

“I’m not the kind of person to look back and dwell on the past. The important thing to me is that I only borrowed him [that is, Abraham] my title and now I want it back,” BoxingNews24 quotes Stieglitz as saying.

To note, Arthur Abraham and Robert Stieglitz had first faced one another in Berlin on August 25, 2012, and the Armenian boxer was declared the winner by unanimous decision and he took the WBO Super Middleweight Champion’s belt from the German fighter. And Abraham defended his WBO belt, for the first time, against Frenchman Mehdi Bouadla, on December 15, 2012 in Nürnberg, Germany. Abraham defeated Bouadla in the eighth round by TKO.