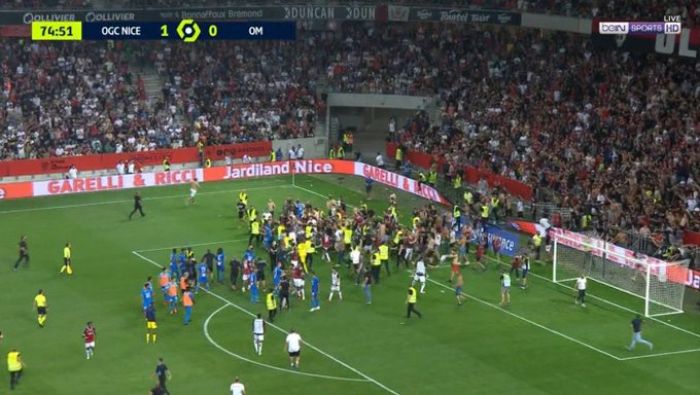 The French Ligue 1 match between Nice and Marseille was halted. Towards the end of this game, the Nice fans threw a bottle from the stands at Marseille midfielder Dimitri Payet.

The footballer took the bottle and threw it back to the stands. After that, the Nice fans invaded the pitch and a clash started in which even the Argentine manager of Marseille, Jorge Sampaoli, took part. Several players of the guests, Marseille, were injured as a result of this clash. The match was stopped in the 76th minute, when Nice were ahead 1-0. Get French Football News reports that the Marseille players refused to return to the pitch and finish the match.

Recap | Nice 1-0 Marseille currently suspended after Dimitri Payet was struck with a bottle by OGC Nice ultras. Payet threw the bottle back, the ultras then broke onto the pitch. pic.twitter.com/6sjtpbwr4Q

Minutes later, Jorge Sampaoli appeared to be insulted by something Nice defender Jean Clair Todibo said & was held back by a mixture of Dimitri Payet/stewards/his own coaching staff from engaging in a scrap. pic.twitter.com/IvRI4UmgCE

OGC Nice ultras drew blood from Dimitri Payet on his back & other Marseille players have strangle marks on their necks, according to Amazon.

Nice fans have run on to the pitch during the OGC Nice-Marseille match. pic.twitter.com/SJPs4x9Whk