Those were tears of joy and sadness – Arthur Abraham 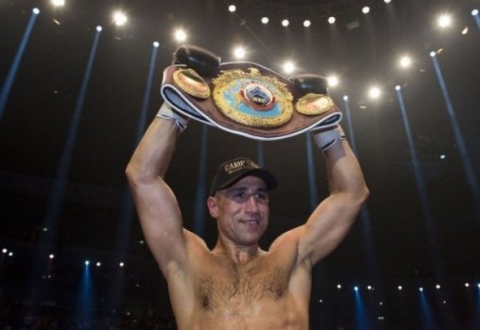 NEWS.am Sport interviewed newly-crowned WBO Super Middleweight Champion—and former IBF Middleweight Champion—Armenian boxer Arthur Abraham (35-3, 27KOs), who won this belt in his championship belt bout, against the now former champion Robert Stieglitz (42-3, 23KOs), which took place on Saturday in Berlin. And below is an excerpt from the interview.

Arthur, your fight against Robert Stieglitz very much differed from your previous bouts.

Yes. This fight’s tactic was especially selected. They always think Arthur Abraham fights a passive fight. From now on I will fight in this way in this weight category; actively and somewhat aggressively.

Stieglitz was unable to connect the lion’s share of his punches in his fight against you. Was this likewise a result of using that tactic?

Yes, of course. We had studied the opponent’s style very well, and I was able to build the fight correctly. Stieglitz was becoming active in the first minute of each round, but the advantage was passing to you in the final two minutes. The opponent wanted to get an advantage, and I knew that very well. But I was forcing him to beware.

You looked a lot more energetic towards the end of the bout.

There is no doubt that I was well prepared physically. But I should note that I distributed my strength very well during the entire twelve rounds.

The result of the fight was already clear at the end. Did you know that you had won?

I believed that I won because Stieglitz had numerous injuries on his face. Subsequently, he was taken to hospital to put stitches on the cuts on his face.

You were very poised during the entire bout, but you cried once the victory was officially announced. Was this the first time?

Yes. I had waited for this victory for truly a long time. And one victory does not comprise the twelve rounds [alone], but rather a much longer time. Those were tears of joy and sadness.

Don’t you think your previous defeats helped you beat Stieglitz?

They definitely helped. Although I lost those bouts, I learned a lot [from them].

During your German-language interview after the fight, you spoke in Armenian, too.

Yes. I said what I wanted to say. It doesn’t matter where we live. We are [a] small [nation] yet they call us Armenians.