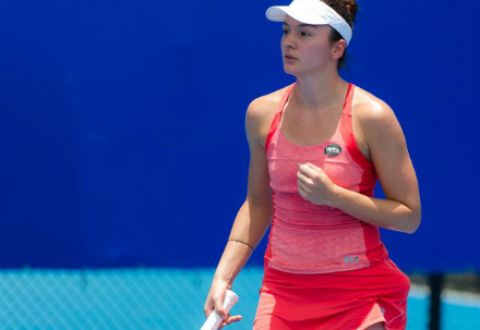 Gasparyan told us that during her childhood, she used to come to Armenia very often to see her grandparents.

She said she loves Armenia, especially capital city Yerevan, and hopes she would be able to visit Armenia this year.

She added that even though she was born and raised in Moscow, she will never sever her ties with Armenia. Gasparyan noted that had she represented Armenia in tennis, she would represent herself as a person Armenia.

The young tennis player said she says everywhere that she is Armenian. But she had to conceal her Armenian nationality when she gone to the Azerbaijani capital city of Baku to compete in a WTA tournament. In Baku, she had introduced herself as Russian.
Margarita Gasparyan said her biggest tennis achievement so far is making it to the fourth round in the recent Australian Open.

She noted that she very much would like to participate in the Olympic Games, and she hopes to be able to compete in the 2016 Summer Olympics, which will take place in Rio de Janeiro, Brazil.
Gasparyan said she would consider representing Armenia, if there had been such an offer from Armenia.

She added, however, that if she were to receive an invitation from the Armenian Tennis Federation, she would gladly come to Armenia and hold master classes for Armenian tennis players.
Margarita Gasparyan noted that her dream is to win a Grand Slam tournament as well as to become an Olympic gold medalist.