Uli Hesse: We knew Mkhitaryan was not smiling a lot 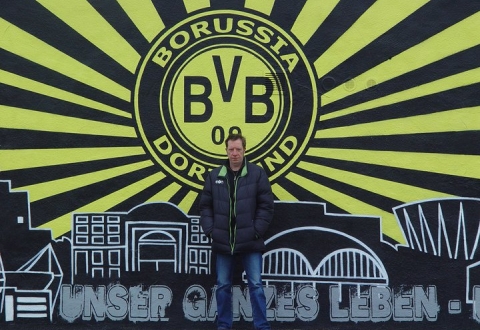 Mr. Hesse, one of the most popular sport magazines "11 Freunde" put Mkitaryan on the cover last month. Why did you choose him?

I went to Dortmund for an interview. The idea was just to have an interview. The cover story might be about word cup. But we had a problem with it. It had not arrived at time. We got a chance to talk with Sami Khedira, so we switch the thing around and I switch the interview into profile and article about Mkhitaryan become cover story. We thought that an interview can be good enough to become a coverstory, so that’s why we also took a photo. .. because we thought that he has such a good interesting person and he is very clever and interesting person. We thought that interview will be good enough for cover, the only thing that we were not sure that if it will be good enough in English, because he knows Russian and Frenchfluency. But in the end he turd all well and it was wonderful.

What was the focus of your interview?

I knew his family story, that his dad died and they had to go back to Armenia. That was the main story. From that we went to situation in Dortmund. But I started from an interview with chess. I asked him to play with we, but he answered, that he had busy enough.

What impression did you get from him?

Henrikh came here last summer. He gave few interviews. He came across like very clever and intelligent guy. But we also saw that he came across as very serious young man. He doesn’t smile a lot, he always look very serious, very committed. We tried to get photo of him when he smiled. We thought it would be difficult. But it was vice versa. He was very open, friendly and humorous. He was laughing all the time. That  was two of the main accepts of the profile. On was him as a person and other was role in Borussia Dortmund. We were impressed how much he wanted to play well. He played very well, but he can do it better. He plays like someone who put himself under a lot of pressure. We talked about it during interview and he sad that he knows it. Coach Jurgen Klopp told him it many times and he has to learn how to relax and become more easygoing. He said that he felt himself under a big pressure at the first 6 months in Dortmund and now he is more relaxed.

What has caused this pressure?

It’s the combination of different things. He knew that Dortmund paid a lot of money for him, that never had been paid for any other player. Also he understood that he came to a different place. He didn’t want to disappoint people. He explained in interview that he played another football that he played in Donetsk. Here he plays more like a playmaker, but in Donetsk his role was more to be a striker. Also we all know that Dortmund has a difficult season. It is not his fault. Team had a lot of injuries. So thing didn’t really went this plan for team. But it’s also about his character. This what I wanted to talk with him about his childhood and family. He seems  to be as hard almost melancholic, who think sabout things a lot. I think it’s coming from his childhood.

What did you advise him,not to pay attention to it?

I think we have to wait. I didn’t write this in magazine, but will tell you. I am from Dortmund. I know the team very well and I tell everybody there that he is got to be a really very good player next season. I mean his is obviously a good player and has huge talent. But at this moment he knows that he can play better and also he feels himself under this big pressure. Next season there will be less pressure on him. Except injuries, there is another point also. Borussia plays demanding game. It’s not easy for somebody to come in and immediately understand what they waited from him and how he should behave. Normally it takes a season to reach it. Even Lewandovski. He is a world-class striker now. He was struggling during first year, but you could see that he has a talent and brain. We were all very optimistic that he would eventually break through and the same for Mkhitaryan, because he is very talented.

Could you describe Mr. Klopp's attitude toward Henrikh?

Klopp is very close to his players and very protective for them. One of the reason of Dortmund success is that, players want to play for Klopp. He talks a lot with them. He is very smart man. He knows that there are some players, that have to be more protective, like Mkhitaryan who came from different country, culture and clubs. There were talking here. You know every summer Borussia buys new players. And everybody talks that they never had two players who could settle in as quick as it did Mkhitaryan and Aubameyang.  Everybody says that it comes from their characters. There were immediately accepted. First thing that you see in Henrikh is that he is very friendly. When we finished an interview he told me good-bye and went for his training. I felt like I met a very good friend. It’s so unusual in football. He is very easy to like.

And what attitude do the fans have?

It’s generally very positive. For instance he didn’t play very well against Madrid, as most players did. I think in the on the one hand it’s a general attitude that he is so expensive, but at the same time everybody sees that he is very talented and wants to give his best.

Last week one of the British media outlets described transfer of Mkitaryan as one of the worst in Germany. What do German journalists think about it?

If you try to look at this professionally, you may say that he didn’t play as well as last year. And Dortmund is many points behind Bayern Munich and we  are probably out of Champions League. It’s the professional attitude. We don’t know yet general attitude of our press. He is not really disappointed. There were few games that he couldn’t play good. Many people believe that next year he will play better. And also everybody understands that this year is bad for the entire team. Last year Dortmund was in the final, so expectation also was very high for this year.

What do you know about Armenia and did Mkhitaryan help you to know Armenia more?

Before going to an interview with Mkhitaryan I made some research. The reason I wanted to play chess with Henrikh because I am a chess player. So I always was ware for Armenian chess. I didn’t know much about Armenian football, but about chess. I knew that Armenians are all over the world. A good friend of mine is married to Armenian girl. She teaches German to Armenians. I wrote mail to Dortmund suggesting her a person to teach Mkhitaryan, but  they found another teacher. But to be honest here people do not know much about Armenia. And we talked about it in interview. Henrikh was telling that his mother told him how to be an Armenian after they were back from France.

Do you know that three most popular Armenian sportsmen; Mkhitarian, boxer Arthur Abraham and chess player LevonAronian live in German? Which of them are more popular there?

I know them by name. Mkhitarian told that he would like to play with Aronian. And also we were talking, that chess is taught at schools in Armenia.

Germany is a very big country. We have so many teams in all kind of sports. We are very successful in different kind of sports. But football is another level. Here they say three main sports in Germany are football, football and football. People also like chess, know all the players, but  it’s not the same as football. First pages of sport journals are all about football. Mkhitaryan is most popular Armenian sportsman in German.

Last summer Mkhitaryan was very close to moving to Liverpool. What do you think, why did he decide to choose Dortmund?

He told me that there were two reasons for him to move to Dortmund; he likes their game, he played against them last year in Champions League, but the main reason is coach. After he had met and talked to Klopp, he decided to play there. And he is not the only one. Many players told that they play for Klopp. Did you read the joke of Ibrahimovic. When Klopp was giving an interview and Zlatan was passing by, he asked Klopp “When are you going to take me to Dortmund?” Klopp said “We can’t afford it. Ibrahimovic answered “ I will come for free”. Of course he was joking, but many people respect the team because of Klopp. Sometimes when player has doubt which team to choose, they take him to the stadium. I don’t think Mkhitaryan chose Bundesleag over the premier league, I think he chose Borussia over Liverpool.

So, did German learn how to pronounce last name of Mkhitaryan?

On the first page of our journal we wrote Mkhi..something  and that’s because national coach of Germany called him this way. But he is not the only one. To pronounce Aubameyang is also very hard. There was a joke among Dortmund fans, that this season will be very hard for supporters. We also has Błaszczykowski from Poland.

I asked him if he would like to give an interview in English or French. I said I can’t speak French but if he feels more comfortable in French I can use translator, but he told, no. In the end he said ‘’Goodbye, see you next time” in perfect German. Somebody told me that he speaks German quite well already, but he doesn’t want to use it in interviews.