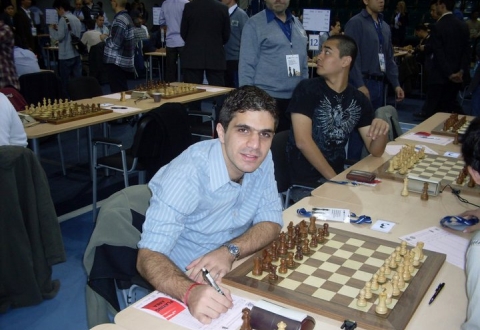 Strong, fighting and brave Armenian spirit plays a crucial role in Armenian chess players’ victories. Our players go there and do the supposedly impossible thing over and over again, member of Brazilian chess team Krikor Sevag Mekhitarian said in an interview with NEWS.am Sport.

It would be very interesting to know about you. You are Armenian. What you can tell about your family. Do you speak Armenian, do you usually visit Armenia?

Yes, I’m very proud to be Armenian and have learnt about our history through my parents (both Armenians, my mother being born in Brazil and my father in Lebanon). And I also studied my whole childhood in an Armenian school we have in Sao Paulo, which is the city I’ve born and still live in. My sister and I learnt the Armenian language at home at the time we were learning Portuguese when growing up.

I’m very happy to speak Armenian, to be able preserve our culture, and also communicate with all the Armenians I meet during tournaments around the world. Many times, in different countries, I had local Armenians inviting me to their houses, having Armenian food and listening to Armenian music, while talking about our beloved nation. They were all very happy to find out my family gives such a big importance on maintaining our values.

I visited Armenia three times, first in 1999 with my father. It was such an amazing experience to be in touch with our ancient history and everything I’ve learned and listened about our country and our heroes. And last time in 2010, for the Pan-Armenian Chess Olympiad.

How did you learn to play chess? Do you remember your first steps?

My uncle is an amateur chess player, and my father learnt the game from him when they were young in Lebanon (my grandparents had to move from Armenia in difficult times).

The story my father tells me is that when I was seven, he saw me building a puzzle with the pieces upside down and thought I had a good memory or could enjoy a game with a lot of thinking and logic, like chess. After that, we used to play one or two games every night when he came back home from his work. I got upset he was beating me every day! After some point, I got really interested and he hired a chess trainer, but it was mostly for fun – only four years later I played in my first Sao Paulo State championship, achieving the 22th place – amazing for me at the time!

In 2010 you became a grandmaster. During this time which is the higest level that you achieved.

Yes, obtaining the most important title in chess was amazing and rewarding after so many years of hard work. Now, in the next FIDE list I will achieve my highest level ever, with 2,552 Elo rating points and with hopes to improve more in the following years.

This year you took part in Wijk aan Zee tournament. What can you tell about this tournament?

It is an amazing festival in the Netherlands that gathers many world top players (like World number 1 and 2 – our dear Levon Aronian, as well as the current world champion), and also talented young stars, not to mention thousands of amateurs. Being there is great not only for playing, but also to be part of everything, and to have the chance to learn something from the absolutely best players in the world. The only problem is tolerating the European winter, never easy for a Brazilian!

What is your goal for this year?

Currently my goal is to achieve the 2,600 Elo-rating mark, which would put me in the 3rd place in the Brazil List (I’m currently ranked 6th), and I want to start that by trying to win the Brazilian Championship which starts on February 25.

Brazil is a country of football. How it is going with chess. Is it popular sport there?

Well, chess is getting more popular everywhere in the world, but it is very hard for any sport here to get the same support that football gets. People hear about chess, but they have no idea who the best players are or how we did in the last Olympiad, because the media doesn’t talk about it, and we simply don’t have a chess culture, unlike many European countries.

That is why many top Brazilian players always have to travel abroad (mostly Europe) to get a chance to play strong tournaments against stronger players, because that’s the only way to improve your level.

Who are Armenian chess players you are in touch with?

I stay in touch with some of them through Internet and I like to spend time with them while being in a tournament, because meeting them always brings an amazing feeling that they’re part of a family that I also belong to. Recently, in the Wijk Aan Zee tournament, I was hanging out with our stars Levon and Sergey.

What can you say about Armenian national chess team? Why did they have this kind of success?

Well, there’s nothing to say, they’re just doing unprecedented things – winning Olympiad after Olympiad with a team which is very strong, but thinking individually. This simply shows incredible team spirit that they have, and that’s not only because of the players and the coach, but I’m sure it is about the strong, fighting and brave Armenian spirit. It is playing a very important role when our players go there and do the supposedly impossible thing over and over again. It’s just a great pride for all of us.

Well, it would be simply amazing to be a part of it, one day perhaps.

What is chess for you? It is mathematics or a lifestyle?

Well, whenever I get asked that, my wish is to say that chess is everything – because it just awakens this sort of passion that goes much further than simply mathematics. And technically speaking, the best players are the best not because they are ‘calculating’ all the possibilities all the time, but because they understand the game better than anyone. They know better the patterns and very often they simply ‘feel’ which is the right move, even not being able to explain concretely – this is one of the things which makes this game beautiful. I can say that being a professional chess player is indeed a lifestyle. It makes you learn a lot of different things about life and people.

Are you active in social networks and blogs. You have a blog as far as I know.

Yes, I have a blog for over 4 years now – it is sort of popular in Brazil, but sometimes I’m writing also on Facebook or Twitter to make short statements about my tournament games, when I’m playing. I like to be in touch with the people that follow me, because recently, especially in Brazil, we have developed this big chess audience. Having this kind of recognition gives me a great feeling and also improves the hope that one day chess will have a greater importance among all the sports in Brazil.

Well, I would be lying if I told you that I never catch myself dreaming of becoming a world champion someday. But being realistic, becoming a professional made me highly competitive. As to chess, I have two dreams – first is to keep on improving constantly and never be satisfied with your results, until you are in fact World Champion (I learned that from an Armenian Chess Trainer once) and the second is to continue enjoying it, and to always have this strong passion for the game. I believe that in the moment you lose that passion, you can still keep on playing professionally, like many do, but things will never be the same, and you will hardly reach your ultimate goals.