Yamanaka agreed to fight with Darchinyan only in Japan 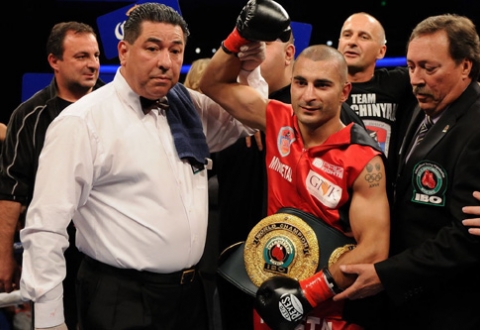 Bantamweight champion, Armenian Vic Darchinyan has already achieved success in professional ring being the first to win the title of absolute champion in the lightest weight category. ‘Raging Bull’ will fight with Japanese Shinsuke Yamanaka on Apr. 6 in Japan for the WBC bantamweight title.

“Darchinyan has always taken serious all his opponents and got prepared to every fight by training hard,” Vic’s coach Vazgen Badalyan told NEWS.am Sport adding the upcoming fight is not an exception.

Darchinyan will pass on sparring to make quick movements in the ring as fighting with the Japanese is not so easy. Moreover the fight is scheduled in Japan. It was the only condition that Yamanaka agreed to fight. At the same time, Vic agreed to it as he would have the chance to show his privilege over his opponent in his homeland.

“We take into account that judges in Japan can also make mistakes. In boxing, in particular, no one is secured from disputable decisions. The only situation when the judges are powerless is the knockout. Vic has such a blow. On the other hand, if the fight continues for the 12 rounds, it would be necessary to achieve an obvious privilege in each one,” the coach said characterizing Yamanaka as moving quickly in the ring. “But Vic will prove his high class and conquer a new title.”