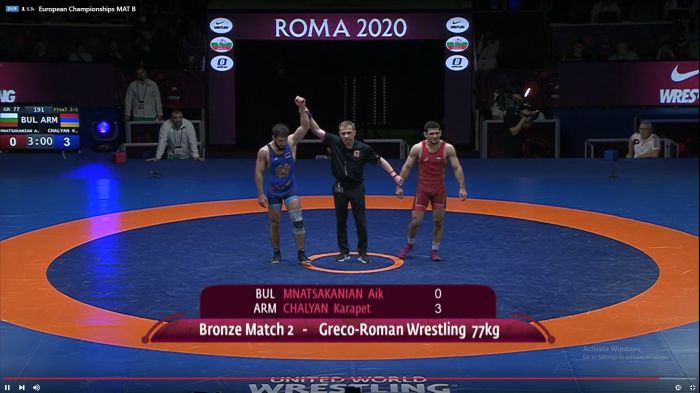 During the match of 77 kg category wrestlers for the bronze medal, the wrestler from Armenia’s Gyumri competed with Bulgaria’s representative Hayk Mnatsakanyan, who failed to continue the struggle due to a hand injury.

In the first round, Karapet Chalyan had an opportunity to work from the bottom, rolled and injured Hayk Mnatsakanyan’s left hand. The referee stopped the match, and after doctors checked Hayk Mnatsakanyan, he decided to continue. At the outset of the second round, Armen Nazaryan’s student wanted to continue the match, but doctors didn’t let him, and Karapet Chalyan won.

Chalyan began from the qualification stage in which he beat Switzerland’s representative Nicholas Kristen, outscored world champion, Serbian wrestler Victor Nemes 3-1 during the 1/8 final and beat Belarusian wrestler Pavel Liakh 5-2 during the quarter final. However, he was defeated by Azerbaijani wrestler Sanan Suleymanov 0-3 during the semi-final.

Chalyan also became a bronze medalist during the 2016 European Wrestling Championships. He is a vice-champion of the European Games held in Minsk.

During the world championship held in Nur-Sultan, Karapet Chalyan scored a pass to the 2020 Summer Games in Tokyo.