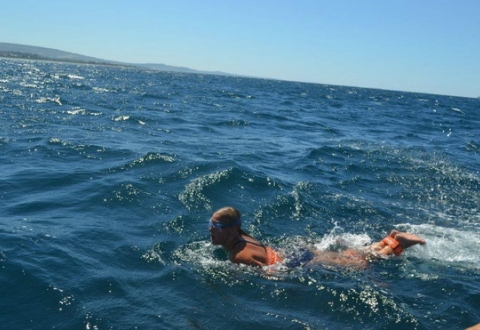 A 17-year-old Georgian girl by the name of Ani Lominadze became the world’s first female to swim acrossThe Dardanelles with her hands and feet tied.

Lominadze used an ancient Georgian military swimming style known as “kolkhuri,” which is a movement of the pelvis and the thighs.

The start of the swim was given in the Turkish city of Eceabat. Ani Lominadze crossed The Dardanelles in fifty minutes and swam a 5.5-kilometer distance, newsgeorgia.ru reports.

To note, The Dardanelles , formerly known as Hellespont , is a narrow strait in northwestern Turkey connecting the Aegean Sea to the Sea of Marmara. It is one of the Turkish Straits, along with its counterpart the Bosphorus. The strait is 61 kilometers (38 mi) long but only 1.2 to 6 kilometers (0.75 to 3.7 mi) wide, averaging 55 meters (180 ft) deep with a maximum depth of 103 meters (338 ft). Water flows in both directions along the strait, from the Sea of Marmara to the Aegean via a surface current and in the opposite direction via an undercurrent.

Like the Bosphorus, it separates Europe—the Gallipoli peninsula—from the mainland of Asia. The strait is an international waterway, and, together with the Bosphorus, the Dardanelles connects the Black Sea to the Mediterranean Sea.