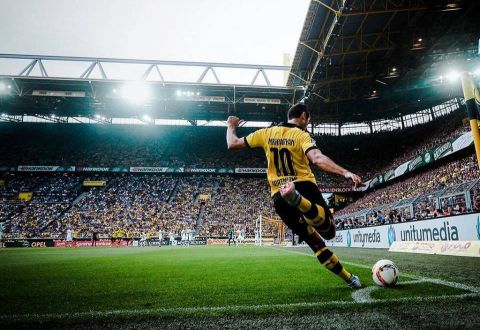 Armenia national squad and Borussia Dortmund (BVB) midfielder Henrikh Mkhitaryan on Wednesday played his one hundredth match for the German club, informed the Twitter account of the Bundesliga, which is at the top of the German football league system.

Mkhitaryan achieved this feat during Dortmund’s Bundesliga game against TSG 1899 Hoffenheim, and during which BVB did not win for the first time in the current season.

In this match, which ended in a 1-1 tie, the Armenia international was initially among the Dortmund substitutes, again for the first time in the current season, but he was subbed in at the second half.

In the current season of the Bundesliga, the Armenian midfielder has scored three goals and made three assists in six appearances so far for BVB.

Henrikh Mkhitaryan had transferred to Borussia Dortmund from FC Shakhtar Donetsk (Ukraine) in the summer of 2013.