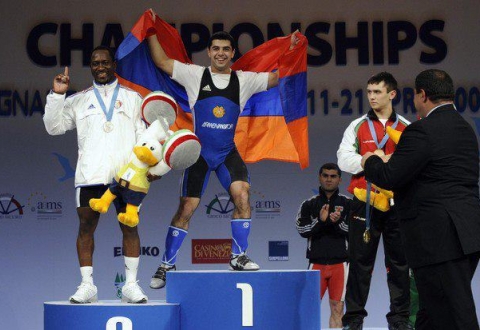 Armenia’s weightlifter Tigran Martirosyan was the state’s hope for the gold. Tigran is the Beijing Olympic bronze winner, as well as world and European champion.

He got an injury just days before the London Olympic and was not able to participate in the Games. News.am Sport took an interview from the athlete. Asked how Tigran, being the key hope of the Olympic gold, got an injury, he said that each athlete dreams of participating in the Olympic Games.

“I was very serious, as I had cured all my injuries and have trained correctly. Everything was all right. However, a month prior to the Games I felt pain in my back, which deepened. It is only me who knows what it worth for me trainings for the Games. I would not be so worried if it were a world or a European championship,” he said adding he did not participate in the Olympics only due to his injury, as there were no other reasons.

In response why Armenia lost the chance to have another qualified weightlifter in the same category, Tigran said that they failed in sending the new application as news on his injury was final only some days prior to the Games. Asked whether he could win the champion when he watched the weightlifters in his category, Tigran said during international competitions with same weight, which he lifted in the first approach, he could simply win silver in the London Olympics.

As for the need of psychologists for the Armenian athletes, and whether Tigran has his personal expert, the weightlifter said that he does not train with the experts and his best expert was his trainer Ashot Mkhitaryan. In addition, if an athlete prepares everything well and trains correctly, he should be in a good shape. Regarding future plans, his injury is not a serious one as before.

Tigran will undergo treatment sooner and he can surely say that he will participate in the world and European championships next year. Besides, his key goal is getting prepared for the next Olympics. It is true he has no girlfriend yet but even if he fell in love, he ruled out getting married prior to the next Olympics. At the end the athlete thanked the agency for fast and complete coverage of the sport events.