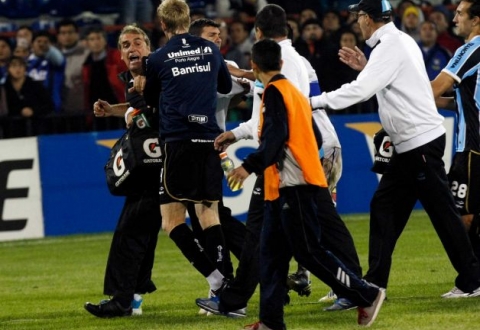 
The Copa Libertadores match—which ended in a 1-1 tie—between Chileans Huachipato and Brazilians Gremio ended in an all-out brawl after the final whistle.

The man at the center of the action was Gremio coach Vanderlei Luxemburgo.
As Luxemburgo trotted off the pitch, the former Real Madrid and Brazil head coach appeared to mockingly laugh at his opposite number, Jorge Pellicier.

Within seconds the Gremio coach was on the grass having slipped over as a couple of Huachipato players charged menacingly in his direction.

Within minutes a brawl had broken out involving coaching staff, players, invading Huachipato fans, and the Chilean police.

The Chileans claim that Vanderlei Luxemburgo had offended and mocked them, Sportsinabag.com reports.