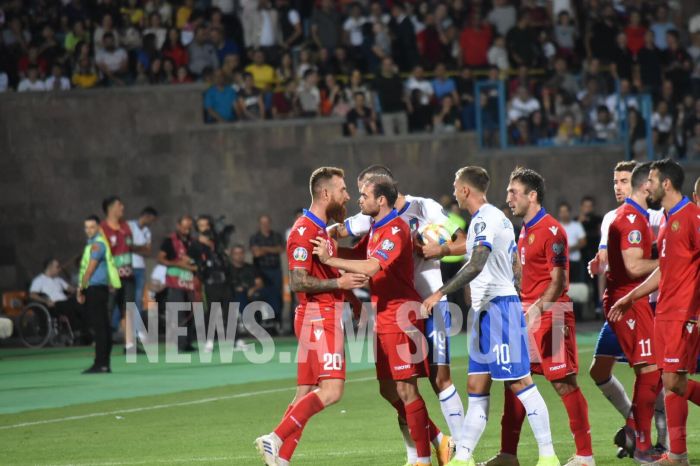 
The Armenia-Italy clash (fifth round of EURO 2020 qualifying) ended with Italy’s victory (3-1).

At the second minute of the time added to the first half, Aleksandre Karapetian got his second yellow card and was removed from the playing field.

Overall, the Italian team was controlling the game, and evidence of this was the control indicator (68%) and the number of passes made by Italian footballers (598).

In the second half, the team of Armen Gyulbudaghyants, taking into account the removal of Aleksandre Karapetian, was mainly playing defense. Armenia managed to play a dangerous counterattack, but in the final part of the attacks, the Armenian footballers didn’t succeed.

The main referee of the clash Daniel Zibert didn’t miss any opportunity to call penalties in the direction of the Armenian team’s gate and to show yellow cards to the Armenian footballers.

Currently, Italy is the leader with 15 points in Group J of EURO 2020 qualifying. The Finnish team comes in second with 9 points, while Armenia’s team is in third place with 6 points. The teams of Greece and Bosnia & Herzegovina each have four points, and Lichtenstein is in the last place with no points.

Prime Minister of Armenia Nikol Pashinyan, President of the Football Federation of Armenia Artur Vanetsyan and President of UEFA Aleksander Ceferin were following the clash at Republican Stadium.