Azerbaijan will not obstruct Mkhitaryan’s participation in match against Gabala 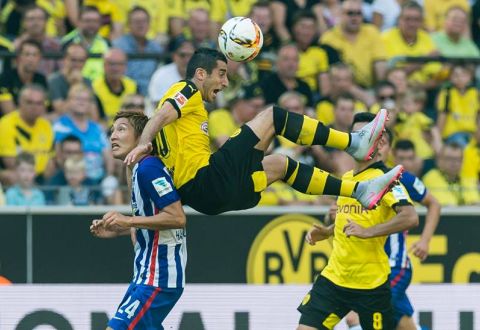 Football is a team game, and the entire team, not the individual, is taken as basis, said Hikmet Hajiyev, spokesperson of the Ministry of Foreign Affairs (MFA) of Azerbaijan.

Hajiyev noted the aforementioned commenting on the discussions regarding Armenia national football squad midfielder Henrikh Mkhitaryan’s possible arrival in Azerbaijan as part of Borussia Dortmund (BVB; Germany), and within the framework of BVB’s Europa League group stage away match against Gabala FK (Azerbaijan).

“Each country playing in UEFA tournaments is committed to carrying out the accepted rules, and pursuant to these rules, hold home matches,” Vesti.az news agency of Azerbaijan quoted the head of the press service of the country’s MFA. “The peculiarity of football is the team game; not the individual but the team, Borussia Dortmund, will arrive in Azerbaijan.

“Athletes from Armenia and athletes with Armenian origin have participated in the First European Games[, which the Azerbaijani capital city of Baku had hosted in the summer].

“We do not politicize sport, and do not use sport for political objectives.

“As for the Azerbaijan MFA blacklist [of people that have visited Nagorno-Karabakh without the knowledge of the Azerbaijani authorities], the case here is reviewed with a particular procedure.”

Dortmund and Gabala are in the same group in the Europa League group stage, and the Gabala-BVB match in Azerbaijan is slated for October 22.