Suárez tried to bite Chiellini one year ago, too (PHOTOS) 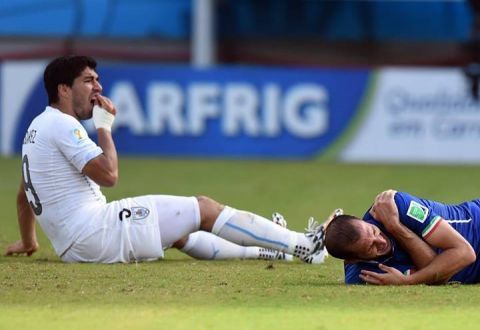 It became apparent that Uruguay national football squad and Liverpool F.C. (England) striker Luis Suárez, who had bit the shoulder of Italy and Juventus (Italy) defender Giorgio Chiellini during Uruguay’s 1-0 FIFA World Cup win in Brazil, had tried to take a chunk out of the same opponent a year earlier, the Independent reported.

This incident had occurred when Uruguay and Italy met in the 2013 Confederation Cup, which Italy would go on to win on penalties after the score was level at 2-2 after 120 minutes.

As proof, the source has posted some pictures from this match, where it shows Suárez dangerously close to biting Chiellini on the shoulder.

As reported earlier, FIFA has launched a disciplinary inquiry into the incident, and if found guilty, the English Premier League’s top player can be banned for two years.

The 27-year-old Uruguay international has been banned before for biting opponents.