Mkhitaryan stats in Freiburg vs. Dortmund 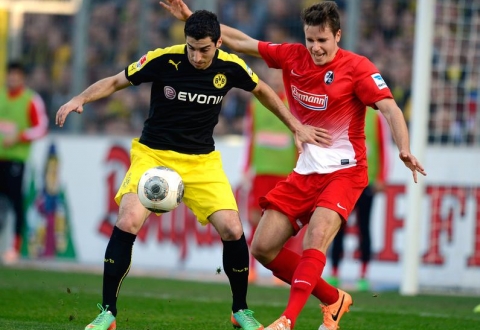 Armenia national football squad and Borussia Dortmund (BVB) midfielder Henrikh Mkhitaryan played in his club’s German Bundesliga away match against SC Freiburg on Sunday. Dortmund won the game by a score of 1-0.

After the match, Whoscored.com posted Mkhitaryan’s game statistics and overall game rating. Accordingly, the Armenian midfielder touched the ball 53 times, made 28 passes with 75-percent pass success; he made one shot on goal, he committed two fouls and was fouled twice. The Armenian international won one aerial duel, he was not caught offside, and his overall game rating was 6.61.

The 25-year-old Armenian international started for BVB, and he was substituted in the 92th minute. In the 33rd minute into the game, however, Henrikh Mkhitaryan received his fifth yellow card in the Bundesliga, and therefore he will not be able to play in Borussia Dortmund’s match against Borussia Mönchengladbach.