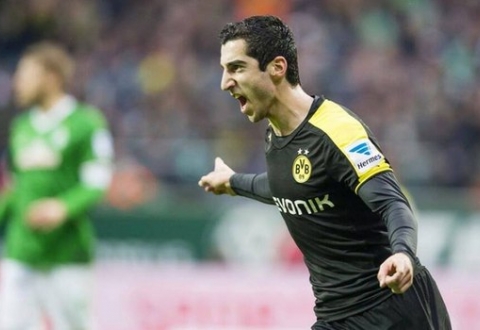 Mkhitaryan returned to his best shape. He responded in the best way possible to a degree of recent criticism of his performance level, Bundesliga.com reports.

“A goal apiece from [Poland international and Dortmund striker] Robert Lewandowski and Henrikh Mkhitaryan had them firmly in the driving seat by half-time, and the duo both doubled their personal tallies following Manuel Friedrich’s first for the club to round out a comprehensive victory.

““Miki didn’t just score two goals, he had a sensational game all-round,” said [Dortmund Manager Jürgen] Klopp [after the game]; “We know exactly what he’s capable of, which football fans and journalists sometimes forget. When it doesn’t go well for two or three weeks, everything’s called into question.’

“The coach acknowledged that Mkhitaryan’s showing at Bremen had been ‘incredibly important for him,’” the Bundesliga website also wrote.

Henrikh Mkhitaryan started for Borussia Dortmund and he played the entire match; the 25-year-old midfielder scored two goals, and Dortmund won the game by a score of 5-1.