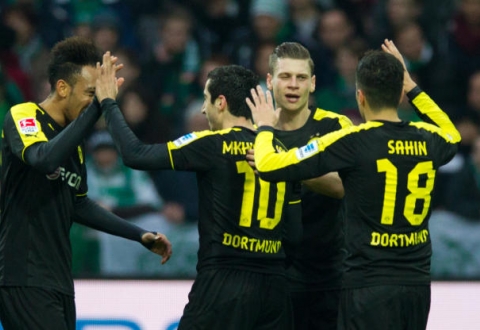 Armenia national football squad and Borussia Dortmund midfielder Henrikh Mkhitaryan played in his club’s German Bundesliga away game against SV Werder Bremen on February 8. Dortmund won the match by a score of 5-1, and the 25-year-old Armenian international scored two goals.

Subsequently, Whoscored.com posted Mkhitaryan’s game statistics. Accordingly, the Armenian midfielder touched the ball 77 times, made 49 passes with 82-percent pass success, he made three shots with two shots on goal, the Armenian international won the ball twice and won one aerial duel, and his overall game rating was second-best at 9.62 out of 10. Henrikh Mkhitaryan started for Dortmund and he played the entire match. As a result of his two goals in this game, the Armenia international increased his goal tally in the Bundesliga to five.