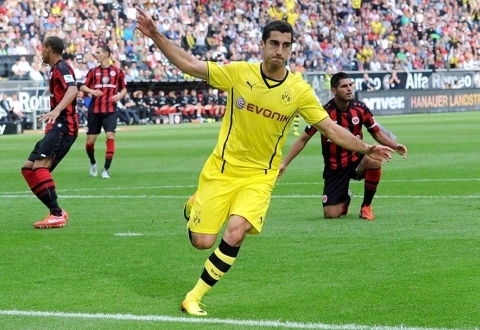 On his Facebook page, Armenian national football team and Germany’s Borussia Dortmund midfielder Henrikh Mkhitaryan thanked the fans that voted for him in the official website of the German Bundesliga.

As a result of the online voting, Mkhitaryan was recognized as the best player of the fourth-round games in the current season of the Bundesliga.

A total of 41.33 percent of the voters had made their choice in favor of the Armenian international.

To note, owing to the two goals scored by Henrikh Mkhitaryan, Borussia Dortmund defeated Eintracht Frankfurt on September 1, and by a score of 2-1. In addition, and achieving four wins in just as many matches, the club went to the break, in connection with the World Cup qualifiers, as the leader.

Print    |  На русском
Thank you for your comment. Your comment must be confirmed by the administration.
last news on "Football – Germany Bundesliga"
Total votes (12)